Madrid, Spain, 15 June 2017: Mergermarket, the leading provider of M&A data and intelligence, has reported that Spanish M&A will overtake 2016’s full year value this month, after Atlantia and Abertis announced their EUR 30.3bn mega deal in Q2. The data was announced at Mergermarket’s 10th Annual Spanish M&A and Private Equity Forum 2017, taking place on 15th June 2017 at the Westin Palace in Madrid, Spain, where the evolution and future of Spanish M&A will be discussed.

Javier Villasante, Partner of the Corporate and M&A Practice at Cuatrecasas commented:

"The M&A activity in Spain last year remained at levels similar to those reached in 2015, which was a very good year. The strength of Spain’s macroeconomic indicators allowed for a steady flow of foreign investment. Having said that, the different political factors witnessed over the last months of the year did have a significant impact, particularly in Equity Capital Markets. Cuatrecasas was very active again last year and continued to lead the volume league tables in Spain and Iberia, advising in 64 deals accredited by Mergermarket."

More than half of all M&A activity in Spain has been made by foreign acquirers, accounting for 74 out of 135 transactions. Activity in Spain demonstrates renewed confidence in the domestic economy as the OECD stated that Spain’s recovery would ‘remain robust in 2017 and 2018’. “Strong cross-border figures clearly show that dealmakers are confident investing into Spain and this year the country could come close to record figures last seen pre-crisis” said Jonathan Klonowski, EMEA Research Editor at Mergermarket.

Spanish private equity is also in rude health, with data showing a surge in year-to-date activity – buyouts and exits combine to increase 161.7% by value across 36 deals compared to the same period 2016 (24 deals worth EUR 2.2bn). According to Unquote, the private equity specialists, Spain closed the first quarter of the year with the highest amount of private equity capital deployed since 2005. Unquote have reported on several high-profile acquisitions including US buyout house Hellman & Friedman and Singapore’s sovereign fund GIC's acquisition of Madrid-based lender Allfunds Banks for EUR 1.8bn in March from Santander, Intesa Sanpaolo, Warburg Pincus and General Atlantic.

"The past 24 months have been marked by a low interest rate environment, which has driven valuations upward and attracted investors looking for yield. This has boosted the activity of infrastructure sectors, which we expect to continue strong, due to the large amount of dry powder available.

As economy recovered and GDP growth accelerated above 3%, more cyclical sectors should pick up and draw the attention of private equity investors looking for growth." 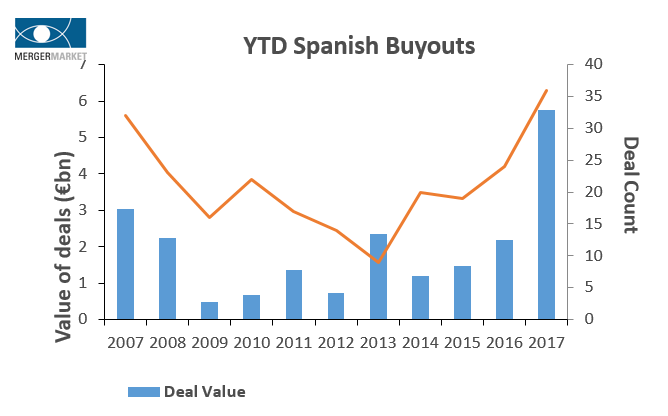 The themes above are being discussed at the 10th Annual Spanish M&A and Private Equity Forum. For more information about visit the event website.