Africa investment seen as magnet to UAE and other foreign buyers

Africa investment seen as magnet to UAE and other foreign buyers

Africa is becoming an increasingly attractive market for outside investors, with many establishing hubs in the UAE to explore such options, panelists at Acuris Studio’s MENA Mergers event said this week.

In North Africa, Egypt and Morocco are also rapidly developing M&A playgrounds offering attractive returns for would-be acquirers, Abdelaziz Abdel Nabi, co-founder at Catalyst Partners said. Egypt’s 100m population consists of 60% under the age of 35, which has a significant impact upon the consumer sector, where more deals are expected, de Gabriele said.

He pointed to Kellogg [NYSE:K] as being one such multinational engaging in such activity, having acquired Egyptian snack maker Egyptian snack maker Bisco Misr a reported EGP 89.86 per share in 2015 and one of the country’s leading cereal company, Mass Food Group for around USD 50m later the same year. Such multinationals are expected to make further acquisitions in the regions burgeoning consumer sector, de Gabriele said, without naming other targets or buyers.

Real estate is another sector in play, and the recently announced strategic review being held by Egypt’s Madinet Nasr for Housing and Development [EGX:MNHD.CA] in which it is discussing a possible takeover by Six of October Development & Investment is a sign of consolidation that is expected to take place in the sector, Abdel Nabi told this news service on the event sidelines.

Egypt, with just less than USD 1bn changing hands over 79 qualifying transactions in 1Q18, was the third most prolific dealmaking country in MENA, according to Mergermarket data, with nearby Morocco the second largest deal playground after the UAE. Moroccan deals tended to be larger with USD 1.1bn worth of deals for just 13 qualifying transactions.

Sentiment-driven growth has seen MENA conduct USD 9.35bn worth of deals conducted during Q1, compared to USD 5.7bn a year earlier, according to Mergermarket data. In contrast, African activity has been muted, partly due to a host of geopolitical changes, such as changes in governments, one of the panellists said. Deal value decreased 45.1% to USD 3.5bn across 30 deals versus USD 6.4bn seen in 4Q17 across Africa, according to Mergermarket data. 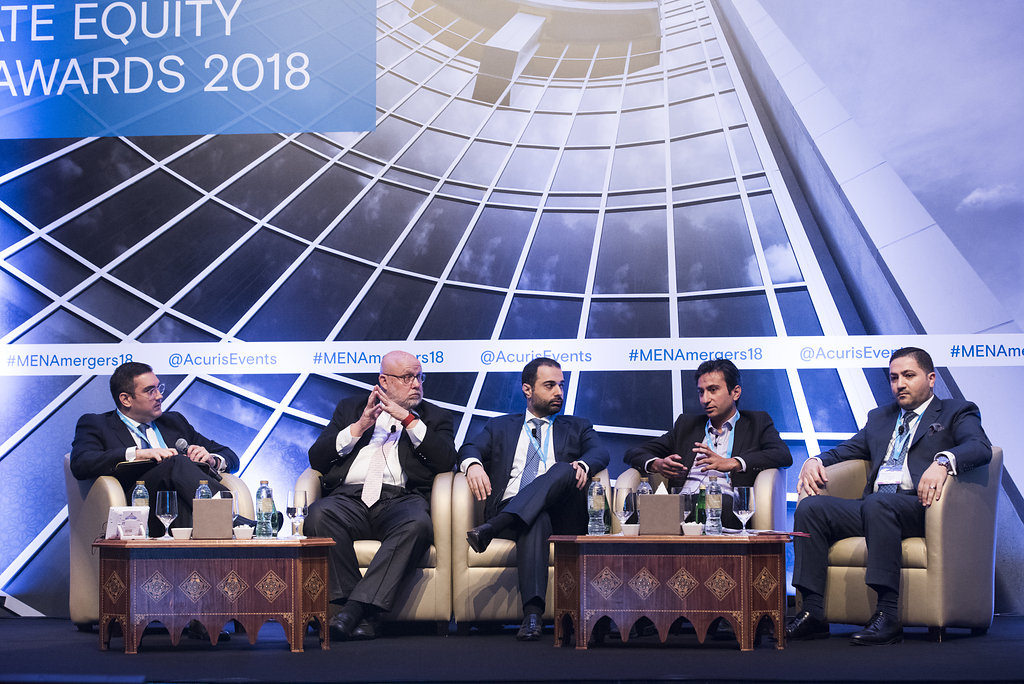 The continent’s macro environment should improve, de Gabriele observed, noting that new regimes in countries such as in Zimbabwe have led to a sense of growing stability and renewed investor confidence.

For this reason, Standard Chartered Private Equity will continue to prefer to acquire well-established players with strong governance and transparent financial reporting processes, Ellawn said, citing SCPE's existing involvement in MTN Nigeria. This can mean paying a little more for assets, but it is less risky, he added, referencing also its buyout of a leading aluminium can manufacturer, GZI, in 2013.

Ellawn advised players to be selective in their investments. He discussed Standard Chartered Private Equity’s own strategy as an example of sectorial focus whereby it targets energy transportation. SCPE invested USD 75m in Dubai’s Topaz Energy and Marine, which operates in Nigeria and Angola. While in the last two years it has been difficult to charter out Topaz’s vessels in those areas, it has won some “pretty good" contracts, Ellawn said.

SCPE is also bullish on the financial institutions sector. It has an existing investment in Union Bank in Nigeria. Investors should keep an eye on this sector as valuations are looking “very attractive” on a price to book basis, he added, without elaborating further.

Currency issues can become a further obstacle, the panelists added. Transactions are often made in dollars but returns are yielded in local currencies, which can be volatile and at the mercy of geopolitical and macro changes, the panelists added. As an example, de Gabriele said revenues pegged to certain currencies can wildly fluctuate. Nonetheless, as stability increases across Africa currencies and hedging instruments are more widely used, offsetting risk has become a more common practice.

For more data and information about MENA Deals start your free trial at Mergermarket today.

Ruth is Head Middle East and North Africa for Mergermarket. Based in Dubai for eleven years she is an experienced financial journalist with an extensive network of contacts in the region.
She holds a BA (Hons) Media Performance from the University of Bedfordshire and is a qualified journalist from the Belfast Metropolitan College.

Ruth is Head Middle East and North Africa for Mergermarket. Based in Dubai for eleven years she is an experienced financial journalist with an extensive network of contacts in the region.
She holds a BA (Hons) Media Performance from the University of Bedfordshire and is a qualified journalist from the Belfast Metropolitan College.