Energy businesses, particularly those involved in exploring for oil and gas, are facing a challenging and turbulent M&A environment to start 2019.

A pattern of private operators leasing an area with shale potential, proving that potential, then selling to a public company bolstered energy M&A for the past 10-plus years, and indeed into the first half of 2018. But that cycle may not work in the current climate.

“We had a real active period from 2005 to now," said Buddy Clark, partner in Houston law firm Haynes & Boone. “The market may be in a transition back to historical conditions.”

For Benjamin Dell, managing director of activist investor Kimmeridge Energy Management, companies in the shale boom have produced growth at the expense of shareholder returns, and now investors are punishing companies for it by shunning the space or building a meaningful stake and pushing for change.

Elliott Management made just that sort of push on 7 January when it offered to buy out QEP Resources for USD 2bn, or USD 8.75 per share. Elliott holds a 4.9% stake in QEP, which has said it will consider the offer and other alternatives.

Dell said exploration and production companies generally produced a 9%-10% return on capital before the emergence of costly shale and unconventional production. Since 2008, Kimmeridge research puts the industry’s average return at 4.2%. 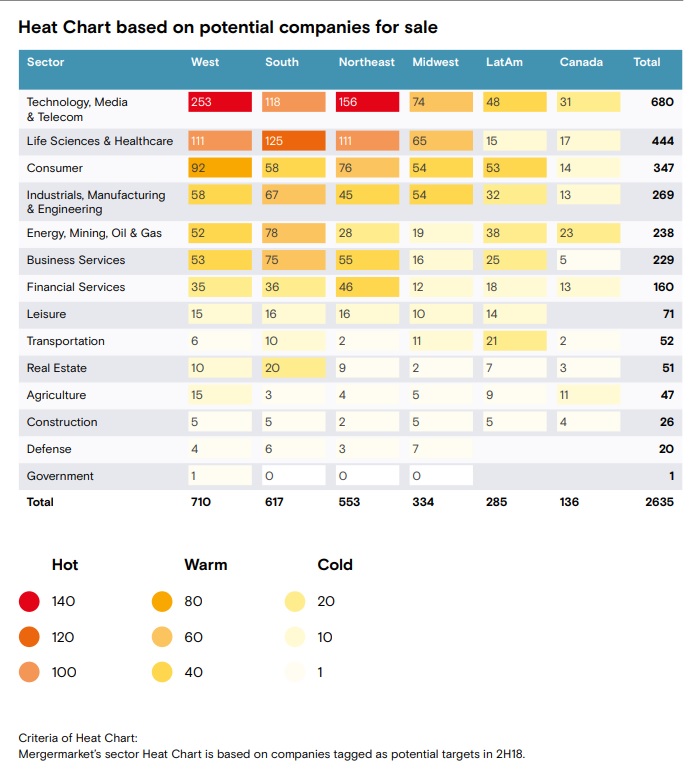 Chart: One sector to watch for potential weakness is Energy, mining, oil & gas, which placed fifth among sectors in terms of companies for sale stories in 2H18. The price of oil has rebounded somewhat since late last year, but overall commodity prices remain volatile, hampering the prospects for dealmaking.

Too many companies, not enough cash flow
The US energy sector has "a lot of companies that are around but shouldn’t be,” and therefore needs to see mergers and acquisitions, said William Costello, senior portfolio manager with Westwood Holdings. The tricky part is determining a catalyst for deals this year, he said.

Should deep-pocketed super-majors look to make acquisitions, they will first opt for privately owned and private equity-backed targets, because such acquisitions are easier to close than acquisitions of public companies, Costello said.

Clark said the most likely place for buyers to step up this year is in West Texas’ Permian Basin, ground zero for US oil production. “They’re all circling around the Permian, but all these other basins are like Jan Brady.”

Dell, whose firm Kimmeridge pushed for Resolute Energy to pursue a deal before it struck a deal to be acquired by Cimarex, said it will fall to the investors who have stayed with the sector to push for consolidation.

He said that small and mid-cap E&P operators should look for zero-premium combinations, which would effectively lower costs and result in more efficient and profitable operators.

Costello concurred that more energy investors are starting to push on companies to realize value. Some public companies are getting the message, he said, noting that Anadarko Petroleum’s recent investor presentation focuses on cash flow and sustaining cash flow over growth. That said, Costello predicted a gradual shift from E&P’s growth posture to an emphasis on returns.

“It’s an evolution, not a revolution,” he said. 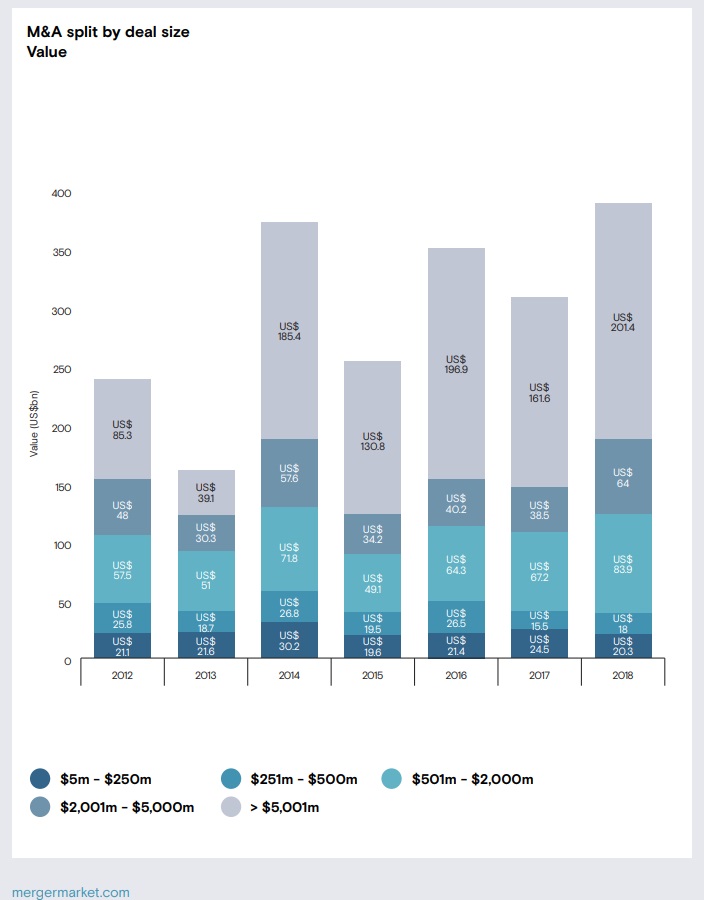 Deals in limbo
An additional headwind for energy deals is the prospect that the handful of late-2018 deals that were announced may not make it to the finish line.

That deal was initially announced on 17 October. Oil prices and futures at the time were in the USD 65 a barrel range for West Texas Intermediate Crude, and began 2019 below USD 50.

“Deals that looked good in October are starting to get pretty ripe,” Clark said.

Other big deals struck in the fall have not yet closed and have faced criticism from investors, including Denbury Resources’ USD 1.6bn deal for Penn Virginia; Chesapeake Energy’s USD 3.2bn bid for WildHorse Resource Development; and Encana’s USD 7.7bn deal for Newfield Exploration.

With public operators strained, the private equity-backed operators that have aspired to sell to them appear stuck in a holding pattern.

Clark said he viewed the most likely buyer of a PE-backed issuer to be another energy PE fund looking to deploy its capital.

Explore the drivers of US Energy M&A at Mergermarket's Energy Forum in Houston.

Chad Watt is a veteran business journalist and natural resources editor for Mergermarket in North America. Before joining Mergermarket, Chad worked as a reporter and editor at the Dallas Business Journal and Orlando Business Journal and at daily newspapers in Texas, Florida, and North Carolina. He is a Southeast Texas native and graduate of Columbia University and Southern Methodist University. Chad is a father of two boys and has completed four marathons since turning 40. He joined Mergermarket Group in 2010.

Chad Watt is a veteran business journalist and natural resources editor for Mergermarket in North America. Before joining Mergermarket, Chad worked as a reporter and editor at the Dallas Business Journal and Orlando Business Journal and at daily newspapers in Texas, Florida, and North Carolina. He is a Southeast Texas native and graduate of Columbia University and Southern Methodist University. Chad is a father of two boys and has completed four marathons since turning 40. He joined Mergermarket Group in 2010.