While local dealmakers are generally optimistic about dealflow in Central and Eastern Europe (CEE), sentiments are tempered by worries about global macroeconomic developments. This is a valid concern given the region’s dependence on outside investment and its reliance on business ties with Western Europe, particularly Germany.

Banking and other financial services segments, as well as IT/technology, energy and utilities are among the sectors likely to continue to attract near-term investor interest in the CEE and the Baltics, sources said. 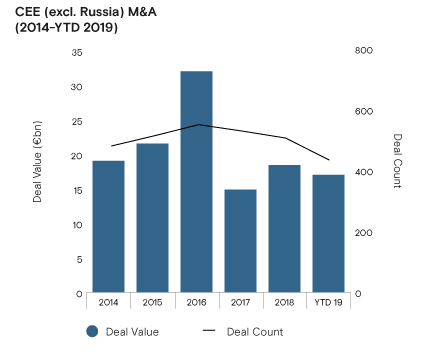 The biggest pending deals which may materialize in 2020 include Commerzbank’s [ETR:CBK] sale of its Polish subsidiary mBank [WSE:MBK], the ongoing merger between Polish oil refiners PKN Orlen [WSE:PKN] and Grupa Lotos [WSE:LTS] as well as market exits by insurers AXA [EPA:CS] and Metlife [NYSE:MET], both of which failed to gain enough scale and are selling off their main investments in the region.

Near-term outlook remains positive, with investors showing most interest in sectors such as healthcare, logistics and transportation, as well as media and entertainment, Aleksandra Karasińska, manager at KPMG Deal Advisory said. Another hot sector is IT, driven by the relative ease of scaling up IT companies as well as by the general demand for automation and digitization from corporations seeking to reduce pressure on wages, she said.

Nonetheless, transaction stats in the second half of 2020 are likely to dip due to the expected slowdown of domestic consumption and GDP growth, several bankers said. In the first half, most local dealmakers polled by this news service said they will be busy working on a host of deals already in progress.

M&A levels in the Czech Republic remain steady with a healthy pipeline of deals on the table, polled advisers and investors said.

With solid financial results, many private owners believe now is the time to sell, the dealmakers said. Given the sense of uncertainty and fear of a downturn around the corner, many companies are trying to complete deals sooner rather than later, some said.

The sectors that are driving much of the country’s M&A activity are industrials, IT, financial services, consumer goods, services and energy, polled advisers said. Consolidation within the financial services sector is ongoing, with the local activities of Wustenrot set to be sold to Moneta Money Bank and Axa and Metlife up for sale, a second local adviser added.

The sale of energy company’s Innogy’s [IGY:GR] retail business in the Czech Republic is expected to be the largest deal over the next few months, several polled advisers said. Mergermarket reported in November that the sale is due to formally kick off in December with BNP Paribas [EPA:BNP] mandated as sellside. Skoda JS  was also highlighted as a notable recent transaction by a third adviser.

Succession sales continue as a key driving factor and will do so for several more years, with many founder-owners deciding to exit their businesses that they set up in the early 1990s. Another key factor is the high amount of available financing from funds, advisers and fund executives said.

Energy and utilities in the Baltics

While lower bank debt availability is among the key cited factors slowing down regional M&A, polled dealmakers remain cautiously optimistic for 2020, unless the region is impacted with a sudden global economic shift for the worst. Nonetheless, generic M&A drivers, such as funding availability from PEs and overall market optimism, are still there, said Teet Tender, partner at PwC.

Foreign players potentially interested in add-on energy or utilities opportunities in the region include Antin-owned French energy infrastructure specialist Idex, UK-based First State Investments, and Swiss Quaero Capital, given their deal-making activity in the Baltics over the last year, a second banker and a lawyer said.

Banking is another sector high on the local M&A activity map, according to a number of dealmakers. Situations to be watched in the coming months include Lithuanian lenders Medicinos Bankas and Siauliu Bankas, both of which appointed advisers for strategic options reviews earlier this year.

The IT and technology sectors may also see deals next year, according to the polled dealmakers. The valuations of tech companies and therefore sector M&A is more resilient to macroeconomic uncertainties, said Sergej Butov, partner at Sorainen. Some local IT startups planning fundraising in 2020 include Estonian eAgronom, Xolo, and Fractory, Lithuanian Qoorio; while Latvian telco Latvijas Mobilais Telefons is interested in IT and tech acquisitions, as reported.