Warsaw, Poland, 26th September 2017: Mergermarket, the leading provider of M&A data and intelligence, has reported that private-equity-backed buyouts in Central & Eastern Europe (CEE) have risen to their second highest value since the financial crash when 52 buyouts worth €5.2bn were announced. So far this year 40 buyouts worth a total of €2.4bn, up 2.5x compared to the same period in 2016, have been announced including the €1.3bn investment into Zabka Polska. The level of buyout activity is set to surpass the previous post-crisis peak in 2015 when private equity funds completed €2.5bn of buyouts. The data was announced at Mergermarket and Unquote’s CEE M&A and Private Equity Forum 2017, held on 26-27th September 2017 at the Intercontinental Hotel, Warsaw.

“Private equity has experienced a stellar year in CEE in 2017 and buyouts in particular have mirrored the wider European trend of big-ticket deals.” 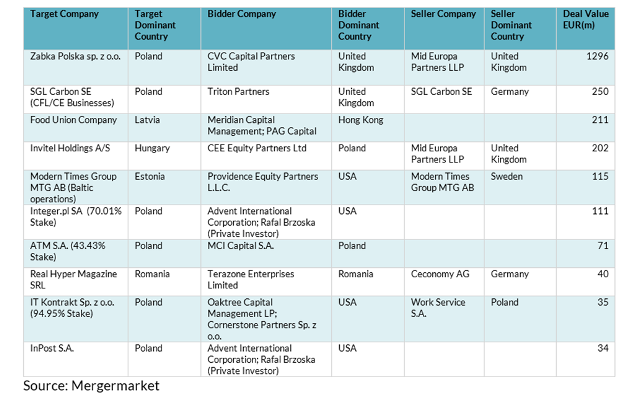 Despite strong dealflow in the region, the majority of capital has been supplied by managers outside of the region, particularly for the larger deals, according to private equity specialists Unquote. This mirrors the decline in the overall amount of funds raised by CEE private equity managers over the past few years. This year, two CEE-based managers have closed funds. Abris Capital Partners raised €500m for Abris CEE Mid Market Fund III and Enterprise Investors raised €498m for its Polish Enterprise Fund VIII.

“GPs across Europe are looking to source value in less competitive parts of the market, and the CEE region has certainly benefitted from this trend. For LPs, this means they are able to get access to the region through pan-European funds, rather than through local managers.” 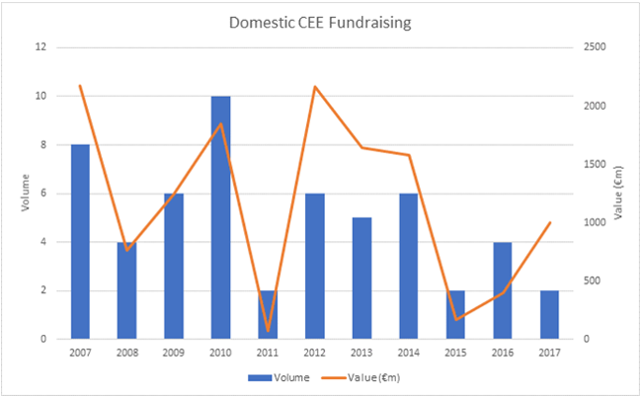 Consumer was the most targeted sector by both value and deal count following 53 deals worth €2.2bn, more than double 2016’s YTD value (56 deals worth €973m). The technology, media and telecommunications (TMT) sector has also seen an increase in value, with €894m across 20 deals announced so far this year, up from €692m (39 deals) in the same period 2016.

Update: This article was updated following the announcement of Enterprise Investors' close.

Condor/LOT deal may be shelved amid coronavirus turmoil - report (translated)