Mergermarket, the leading provider of M&A data and intelligence, has released new data finding that Central and Eastern Europe (CEE) has seen an overall drop in private equity buyout deals - just 27 in the year to date - compared to 63 in 2017. However, deal value has increased from €2,941m in 2017 to €3,619m in the year to date. The data was announced at Mergermarket and Unquote’s CEE M&A and Private Equity Forum 2018, held on 3-4th October 2018 at the Intercontinental Hotel, Warsaw. 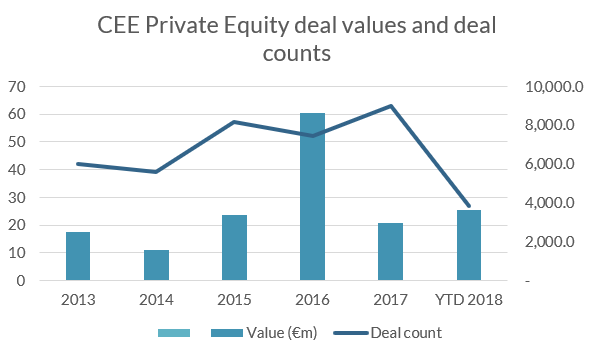 “Private equity activity has surged in 2018, following a number of high-profile buyouts. And with tremendous amounts of dry-powder still available to deploy, the trend seems set to continue into Q4 and beyond,” commented Jonathan Klonoswki, Research Editor EMEA at Mergermarket.

Private equity buyout volumes have been steadily increasing, according to data from private equity specialists Unquote. But this year, buyout volume (24 so far) is likely to be lower than last year (50). The data also found that early-stage volume continues to slump, with only 18 deals in the year to date compared to 42 in total in 2017. Yet, despite the slump in volume, deal value remains robust with €844m in 2017 and €765m in the year to date. In addition, Unquote found that Poland has nearly half (45) of all CEE buyouts (62) in the last few years. 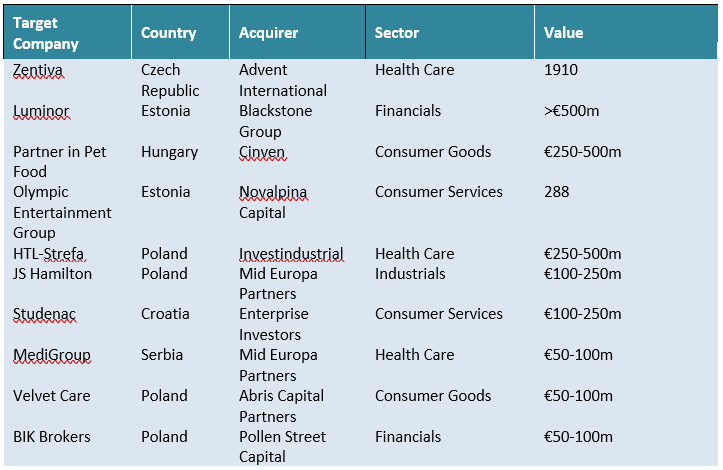 Despite local GPs stating there is a great economy and business environment in the region, local fundraising remains limited. According to Unquote, CEE has seen only €220m in fundraising in the year to date, compared to €1,293m in 2017.

Exits remain strong, with 34 in the year to date compared to 39 in 2017 and 45 in 2016. Trade sales are the most popular exit route but there have been more secondary buy-outs in recent years. In addition, Unquote found that flotations are a much higher percentage of exits than anywhere else in Europe.

“If the first half of the year is anything to go by, the second half could see an ongoing slew of exits in the CEE region. This indicates that local private equity houses have successfully nurtured regional owner-managed businesses and grown them into the established businesses that foreign investors are seeking to invest in,” said Nicole Tovstiga, Reporter at Unquote.

M&A activity in the region has seen an overall drop in deals (277) in the year to date compared to the same time last year (345). However, the deal value (€11,598m) was almost 1.3x the deal values recorded last year. A similar trend was evident in inbound M&A, where there was a drop in the number of deals compared to last year but a higher deal value (over 2x more) than last year. Domestic M&A data reveals a comparable trend, with only 135 deals in the year to date in contrast with 192 during the same period in 2017. The deal value in that period also dropped from €4,438m in Q1-Q3 2017 to €2,846m in the same period this year.

“We have seen a significant decrease in the volume of deals in the region in 2018 to date compared to previous years. Nevertheless, the appetite of PE investors in key sectors such as consumer services, consumer goods, healthcare and industrials remains strong and they are continuously looking for the most appropriate targets in the region,” commented Akos Mates-Lanyi, Head of Corporate M&A in Noerr’s Budapest office.

“Deal count statistics aside, we are having another terrific year in M&A throughout our CEE footprint but particularly in Poland and expect these positive trends to continue into 2019,” added Horst Ebhardt, head of Wolf Theiss' firmwide Corporate Practice Group.

The law firms of Wolf Theiss and Noerr are among the principal sponsors of the CEE M&A and Private Equity Forum 2018.