It has been a year of stuttering deal flow. After a busy summer, deal activity in the DACH region trailed off towards the final months of the year, hampered by the negative prospects of the German economy and buyout houses waiting for clear blue skies before returning to market.

Dealmakers in Germany, Switzerland and Austria are now hoping the new year can bring further corporate carve-out activity and a pipeline filled with sponsor-backed companies ripe for exit.

The decline trails the weakening of the German economy, which narrowly avoided a technical recession in Q3 by growing 0.1%. US-China trade wars, Brexit and the disruption in the car industry have all had an impact in the country.

"We have global economic issues that hit Germany as an export nation, combined with a certain short-term scepticism – we are at the end of a cycle that has been going for nine years,” Wolfram Schmerl, managing partner at Alantra, said.

There is effectively a recession in individual industries such as automotive and the supplier universe that depend on it, which can spread across sectors ranging from adhesives and chemicals to rubber products, Sascha Pfeiffer, managing director at GCA Altium said.

Germany’s industrial sector is suffering its steepest downturn for a decade, with output down 5.3% in October compared to the previous year, according to the Federal Statistics Office.

For some dealmakers, these same difficulties could bring opportunities to the DACH region in the form of corporate divestments.

“The market may see increased carve-out transactions from corporates that intend to streamline their activities in light of more difficult economic times ahead or due to technological challenges, for example in the automotive industry,” Martin Pfletschinger, managing director at Serafin said.

For 2020, the DACH carve-out pipeline has already started to be filled, with Thyssenkrupp [ETR:TKA] in the midst of divesting its Elevators division, with second-round bids due in mid-January, and Continental [ETR:CON] still hoping to list its Powertrain division. Robert Bosch could be making more advances in its reorganisation process with the potential disposal of its Steering Pumps unit, as reported.

With a downturn looming, sectors less exposed to cyclicality and seeing structural growth, such as IT and healthcare are likely to do well in the coming year, Pfeiffer said.

Other topics to watch include those around sustainability and nutrition, as companies realise the benefit of long-term trends in investment, Sven Oleownik, partner and head of Gimv, said.

The technology sector has been among the best performers this year in the region, securing its highest share of volume on Mergermarket’s record – 15.9% compared to 13.7% in FY18 and 12.9% in FY17. Technology deals are largely on par with last year, with 171 transactions YTD versus 181 in FY18, valued around EUR 6bn this year and EUR 6.7bn last year.

Other top performing sectors included pharma, medical and biotech, which registered 110 deals worth EUR 42.8bn and had the top three transactions in the region, and business services, which counted 129 deals and EUR 3.9bn in value.

Switzerland, historically seen as an investors’ haven, could attract more deal activity going forward. “Overall, the mood in Switzerland is slightly better than in Austria or Germany,” Schmerl said. While activity in Switzerland is more in the direction of larger transactions, in the tech-enabled environment, such as fintech, there are many mid-cap companies that are acquisitive, he added.

The country has also seen successful IPOs this year, including the offers by railway vehicle manufacturer Stadler Rail [SWX:SRAIL] and IT solutions firm Software ONE [SWX:SWN].

Largely due to its mega deals, Switzerland has seen EUR 56.3bn in deals with disclosed values, compared with EUR 33.3bn in 2018, despite a 27.4% drop in volume.

The fall in foreign companies making acquisitions in Germany has added to an overall drop in deal activity. Germany witnessed a 12% decline in inbound M&A volume and a 14.7% dip in value, resulting mainly from a drop in investments from the rest of Europe, which conducted close to 20% fewer deals than 2018.

This comes as Germany prepares to tighten its foreign investment rules in measures announced by Germany’s Economy Minister. Under the new proposed amendment, investors buying 10% or more in shares of companies in sectors such as artificial intelligence, robotics, semi-conductors, biotechnology and quantum technology would have to make their purchases public.

Elsewhere in the DACH region, Austria has seen its quietest period of M&A in five years, with only 70 deals amounting to EUR 524m.

The new year could see a return of private equity-backed assets to the market, as holding periods draw to a close.

In value, private equity deals have reached its highest point since the financial crisis, in part thanks to deals such as KKR’s [NYSE:KKR] acquisition of a 54.6% stake in Axel Springer for EUR 4.9bn and EQT’s acquisition of Nestle Skin Health. Private equity could have taken home even more if Advent and Bain Capital had not lost the battle for Osram [ETR:OSR] to Austrian sensor firm ams [SWX:AMS], valued at EUR 4.3bn. 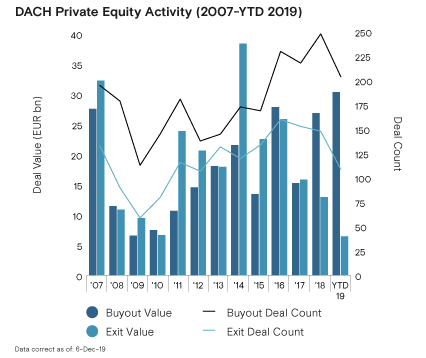 IT-infrastructure, software and cyber-security and business services are sectors to watch in 2020, Gernot Eisinger, managing partner at Afinum said. While traditional German industries such as automotive and machinery will continue to lose market share, these more technology-focused industries will win market share, he added.

Telecommunication equipment due to 5G upgrade investments are among those likely to come to the fore. This comes as German businesses and unions call for a EUR 450bn investment boost from the government, amid concerns that years of belt-tightening have left much of the country’s infrastructure badly depleted.

On the M&A front, companies undergoing M&A have being caught in the middle of these debates. Deutsche Bahn, which is running a dual track process for Arriva, its UK-based transport services division, recently dismissed its CFO amid disagreements about the sale, as reported. The company has seen power struggles between its managers, unions and the transport ministry, which has been critical of delays that have led to Deutsche Bahn not taking advantage of state funding for the railway as part of a climate protection package.