Dealmakers wait with bated breath as Italians go to the polls

Dealmakers wait with bated breath as Italians go to the polls

Political clouds have a Silvio lining.

While some may be feeling a little edgy over the outcome of Sunday’s Italian elections, recent examples of populist shocks, as early polls suggest this weekend’s result could swing, should provide some comfort to dealmakers.

Sunday’s vote could lead to a disjointed parliament, with the incumbent centre-left has fallen in the polls following Matteo Renzi’s failed attempts to reform the constitution. Silvio Berlusconi’s centre-right coalition may hold the keys to power potentially joining forces with a resurgent far-right contingent in the shape of Matteo Salvini’s Lega Nord.

Meanwhile, the anti-establishment rhetoric of the Five Star Movement, originally formed by comedian Beppe Grillo, has resonated around the country polling just under 30% – causing more worry to dealmakers.

Many expected Brexit and Donald Trump’s rise to power to cause a sizeable downturn in activity, and while both have certainly helped shape the direction of M&A flow, dealmaking has largely carried on, regardless of increased political uncertainty.

Last year, Italian M&A recorded the highest number of deals on Mergermarket record (since 2001), with 578 deals worth a combined €59.7bn announced across the year. This represented the second highest post-crisis value and a 19% growth compared to 2016 (€50.1bn). 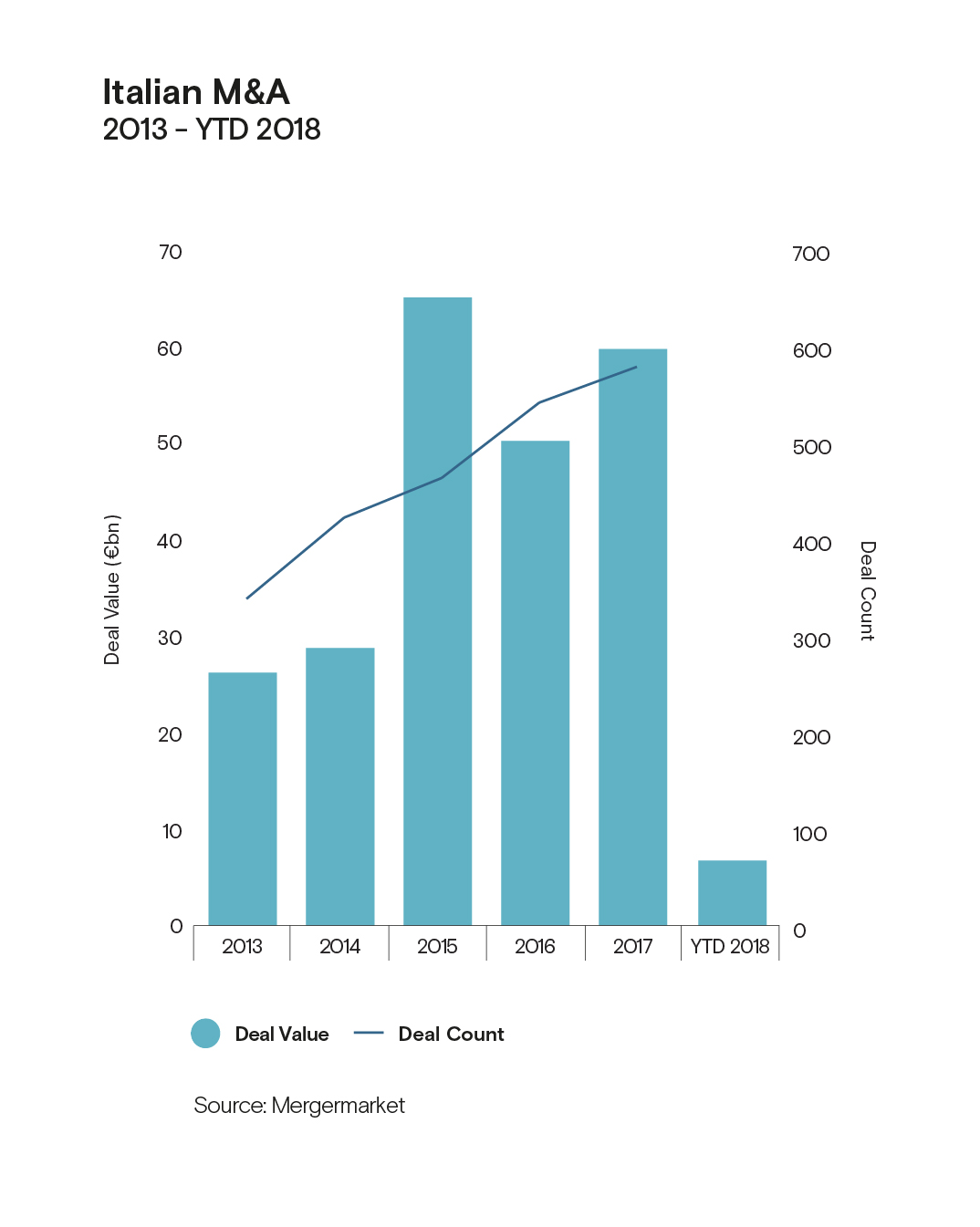 As the country continues its decade-long recovery from the crisis, Italy has seen extraordinary levels M&A in recent years. Mergermarket data shows Italian companies have played host to more than €50bn of investment in each of the last three years.

Private equity activity has been key to the growth in overall dealmaking. Last year, 96 buyouts worth €7.7bn were recorded - the highest figures seen since the financial crisis, propelled by high levels of dry powder and strong interest in ‘Made in Italy’ quality.

This year has already started strongly, with €6.7bn invested in Italy so far this year. This represents the second highest YTD value since the crisis only behind 2016’s mammoth €27.5bn, which was driven by the Essilor-Luxottica mega-merger.
Economic and social stability may be two things absent among many of Europe’s elite at present, yet Italy’s road-to-recovery during this period has surpassed many’ expectations and dealmakers will crossing their fingers for the least disruptive outcome possible in an effort to maintain its resurgence.