Brazilians head to the polls again on Sunday to decide who will run the country for the next four years during a second round that appears clearer than the divisive nature of those running for office, with extreme right candidate, Jair Bolsonaro, expected to walk away winning.

Bolsonaro, from the right wing PSL party received 46% of the votes in the first round, held on 7 October, against 29.98% captured by Fernando Haddad, representing the workers’ PT party, whose influential leader, the former president Luis Inacio Lula da Silva, is serving jail time for taking bribes from construction companies.

The latest poll, released by the polling institute Datafolha on 25 October, points that Bolsonaro would win with 56% of the valid votes.

But, should he take power, which Bolsonaro will lead the country? The former army captain that favoured jingoistic nationalism, or the more capital-driven candidate promising to privatise many of the country’s services?

Brazil’s economy shrank by more than 7% between 2014 to 2016, according to the Brazilian Institute of Geography and Statistics (IBGE) and needs a sharp turnaround. The slippage is an unwanted credit largely attributed to Dilma Rousseff, who led the PT party before Haddad and was in power when the country’s largest corruption case hit in which members of the parties in her coalition misappropriated funds from Petrobras to fund electoral campaigns. 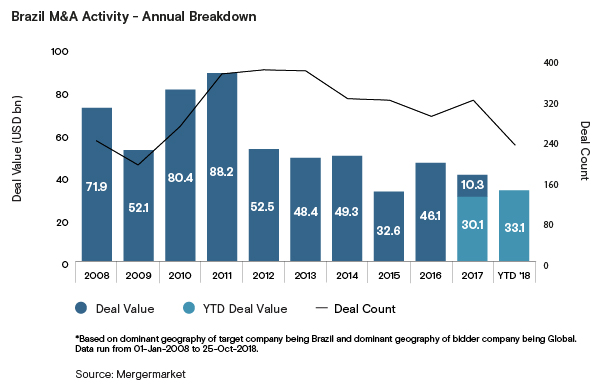 So, what could each party offer a country in need of a reboot?

Throughout the last few years, Brazilian dealmaking has not been materially impacted with YTD numbers showing USD 33.1bn worth of deals across 230 transactions, a 9.8% increase in value when compared to the same period last year. However, deal count decreased by 22 transactions within the same timeframe and almost half of this year’s total deal value was largely attributed to Suzano Papel e Celulose’s [BZ:SUZB3] USD 15.3bn bid for Fibria Celulose [BZ:FIBR3].

Inbound activity, however, has dropped to USD 13.1bn YTD from USD 21.4bn recorded during the same period in 2017, while the deal count fell to 88 transactions from 134. If any of Brazil’s shine has been lost on foreign investors after a time when the BRICs were seemingly heading towards playing a far more dominant pert of global M&A figures, re-attracting this business could be key in the country’s economic development. 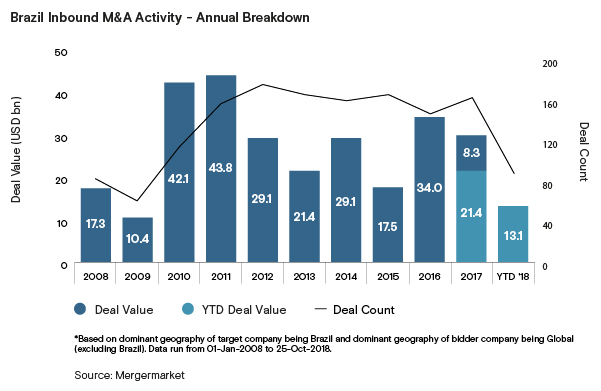 Sectors including infrastructure, healthcare and education are expected to become less of a drain on the public sector under a Bolsonaro government as these become increasingly privatised, meaning the state will spend less in such areas.The retail sector is a field that is also hoped will benefit from renewed confidence offered by the party.

As for these privatizations, Bolsonaro said he would sell 100 state-owned companies, but promised to retain banks Banco do Brasil [BZ:BBSA3] and Caixa Economica Federal, electricity company Furnas Centrais Eletricas, a subsidiary of Eletrobras [BZ:ELET6] and most of Petrobras’ [BZ:PETR4] assets.

Bolsonaro has said that privatizing Brazil’s post office, Correios, which generated BRL 667m (USD 181m) of sales in 2017 after four years of loss, is a priority.

Whatever the outcome, the market expects at the least a slim economic recovery in the coming years, which should come as a welcome relief to Brazilians, who are facing a choice between more of the same and hard line far-right policy.

by Bruna Maia Carrion in Sao Paulo, with analytics by Elizabeth Lim