Having struggled to find growth, small and mid-sized UK banks have additionally wrestled with rising costs while seeing an end to the Bank of England’s Term Funding Scheme (TFS), all amid a national economy that continues to kick any hopes of a rate rise firmly into touch.

Challenger banks were initially empowered to cultivate competition in the banking sector only for the market to become over saturated. Consolidation, therefore, is not only required for the survival of this new wave of banks, but essential for creating institutions with the necessary size and scale to compete with the big five and improve competition at the top.

The post-crash emergence of challenger banks was heavily encouraged by UK regulators, supporting new entrants applying for bank licenses and loosening incumbents’ grip over the UK’s GBP 75trn payments infrastructure by launching the Payment Systems Regulator. This was all done in an effort to break the quintopoly of Barclays [LON:BARC], HSBC [LON:HSBCA], Lloyds [LON:LLOY], RBS [LON:RBS] and Santander [BME:SAN]. Yet several years since the concept was incepted, and after the launch of numerous banking start-ups, the dents these have made in the UK banking market is best described as minimal.

Despite enjoying several years of growth in the wake of the crisis, when the ‘big five’retreated from SME lending and tightened overall loan standards, a space subsequently filled by the likes of Shawbrook,CYBG and Virgin Money, challenger banks have offered little in the way of challenging the incumbents. If the total assets of all challengers were combined, they would still represent a fraction of those they are looking to bridge the gap to.

Greater consolidation among these has long been on the cards since South Africa-based FirstRand [JSE:FSR] announced its GBP 1.1bn takeover of Aldermore Group [LON:ALD] in November, firing the starting gun for further takeovers of UK challenger banks.

CYBG’s proposed takeover of Virgin Money would represent the seventh such deal of a UK banking asset worth more than GBP 1bn since the start of 2013, according to Mergermarket data. UK financial services M&A this year has reached GBP 7.5bn, making it the second highest YTD value since the crisis, behind 2017’s GBP 9.7bn. Furthermore, UK domestic M&A has hit its highest YTD value on Mergermarket record with GBP 37.6bn changing hands so far this year, providing dealmakers glimmers of further movement among challenger banks and the wider FIG sector. 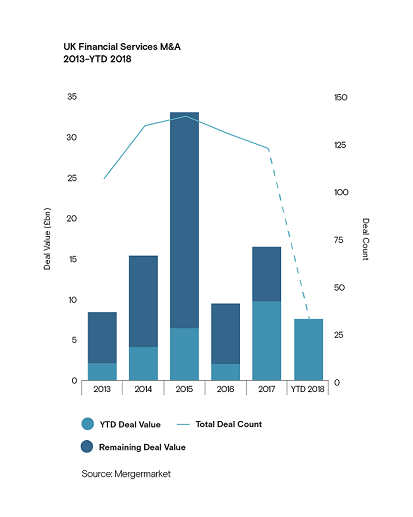 As the adage goes, ‘deals beget deals’. And with more tie-ups expected in the wake of CYBG’s offer, investors have already helped drive up the share price of mid-tier peers Metro Bank [LON:MTRO], OneSavings Bank [LON:OSB] and Secure Trust Bank [LON:STB] in anticipation of further activity across the sector.

Rather than turning to investors, alternatives may exist. Merging with peers may bone such remedy. In the case of TSB,Spanish bank Sabadell [BME:SAB]acquired the lender from Lloyds in mid-2015 for GBP 1.7bn. A weak pound couldadd to the allure of UK-based challengers.

Ring fencing core retail banking from the investment divisions of the largest UK banks in an effort to reduce systemic risk has seen Barclays already finished the necessary house-keeping with HSB Con course to finish this month. Both are eager to deploy capital now quarantined in their refurbished retail banking divisions into areas where challengers have positioned themselves, such as including mortgages. This may apply even more pressure on small and mid-sized peers, making the case for consolidation ever stronger.

As consumer credit continues to balloon and the housing sector is slowing, with one in three British millennials unlikely to ever get a mortgage, it is certainly a challenging time for challenger banks.

by Aaran Fronda inLondon, with analytics by Jonathan Klonowski