M&A throughout 2018 showed a year divided

M&A throughout 2018 showed a year divided. While on one hand, dealmakers oversaw USD 3.53tn-worth of global transactions, making it the third biggest year on Mergermarket record, momentum was soon lost and the final six months slumped by 27.5% compared to figures seen between January and June, according to Mergermarket’s Global and Regional M&A Report 2018.

As has been the case over the last few years, China’s activity did much to influence global trends and year-end numbers. A colossal USD 52bn, or 94.6%, was lost when comparing Chinese investment last year into US companies to 2017's, and the year ended with a mere USD 3bn of Chinese money spent in the States. Yet one continent’s loss was another’s gain, and European companies received USD 60.4bn investment from China, 80% more than in the year before.

China’s investment plans have again been very much government-directed, from 2017’s squeeze on capital flight to a more recent face-off with the US over tariffs, both of which dented the country’s influence and its impact over annual global numbers. 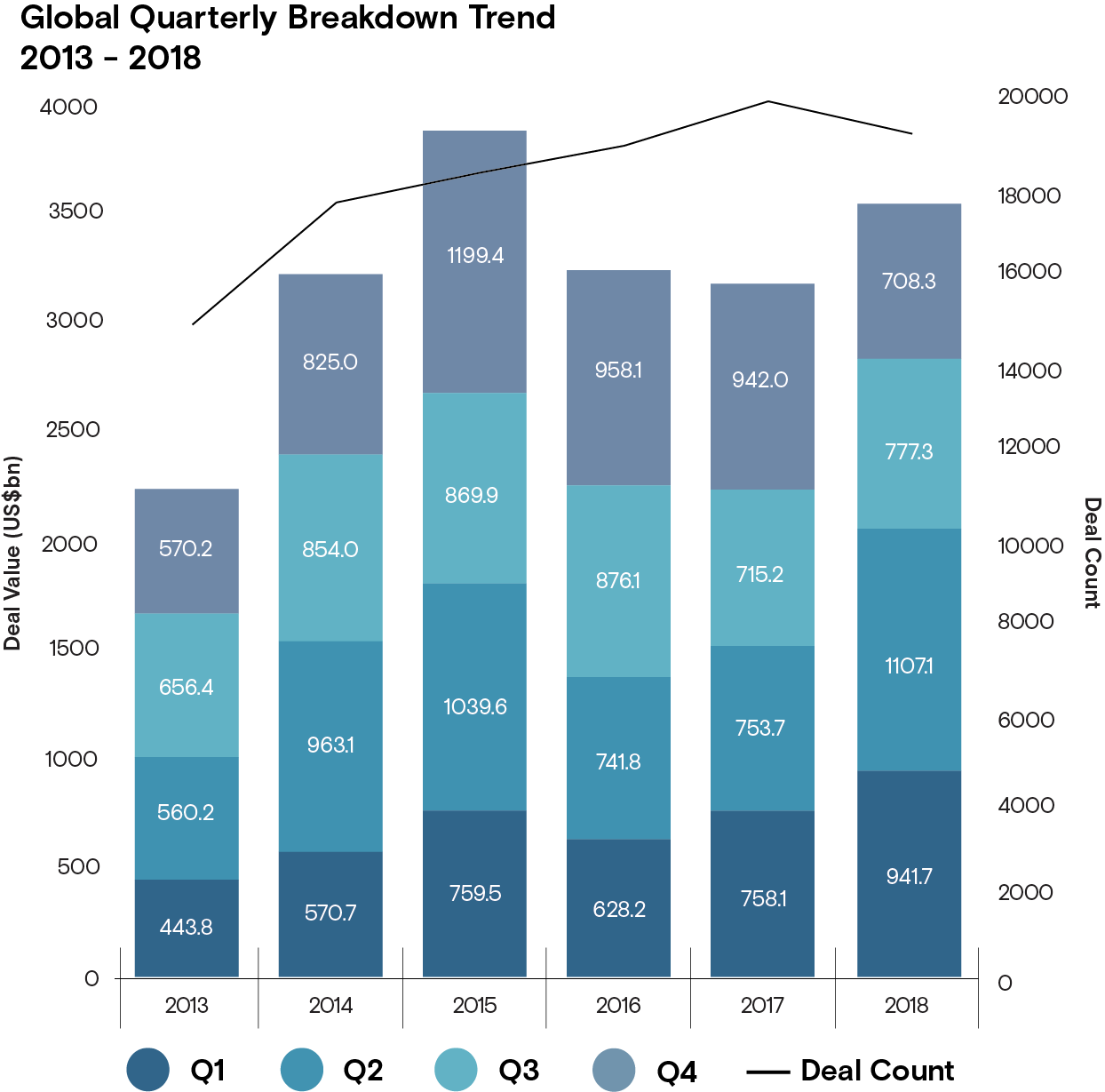 it was the spring of hope, it was the winter of despair

The dramatic swing in deal values between H1 and H2 coincided with Europe suffering its worst quarter since 1Q13. This itself corresponded with increasing nervous tension among those concerned about how the UK’s exit from the EU will take shape and its eventual impact on how countries will trade with the island thereafter. While Brexit has not exactly crept quietly into dealmakers’ consciousness during only the final six months of 2018, this has certainly been the most damaging half-year it has caused to date.

Again, in isolation Europe was quick off the mark to begin this year, sealing ten of its eventual 11 USD 10bn-plus deals in the first five months. It also registered its highest ever post-crisis value, with European corporates pocketing USD 989.2bn-worth of investment, meaning the continent also contributed its highest share of total global M&A activity, accounting for 28% of USD 3.5tn.

Yet the focus for many will be H2’s slowing performance and whether this will bleed into 2019.

As private equity dealing becomes increasingly dominant in annual M&A numbers, 2018 was no exception and continued the upward trajectory it began in 2015. Sponsors spent a total USD 556.6bn last year, adding a further USD 20bn to 2017's figures and more than doubling the equivalent USD 275.1bn reported in 2012. Once again, low interest rates and cheap financing were instrumental in pushing these numbers, and funds have – rightly, some argue – taken advantage and bolstered their portfolios. Others have labelled the degree of leverage as irresponsible.

However 2019 progresses, socio-political events are sure to continue directing M&A. Despite some predicting a sustained period of subdued dealmaking activity caused by the likes of Brexit, ongoing trade wars or a global economic retreat, M&A has already received a much-needed shot in the arm, given the USD 89.4bn Bristol-Myers Squibb [NYSE:BMY] spent buying Celgene [NASDAQ:CELG] this week.