Private equity’s love affair with the French Financial Services sector is growing year-on-year, and as deals begin to pile up, Dealspeak digs around to unearth details beneath the data

On 28 January, one of the most high-profile private equity auctions of 4Q18 came to an end. April [EPA:APR] and suitor CVC announced the signature of a purchasing agreement, valuing the French listed insurance group at roughly EUR 900m. Pending regulatory approvals, the company’s founder’s investment vehicle, Evolem, will sell its 65.13% stake to the private equity firm before a simplified public tender offer for the remainder of April shares is made in the coming months.

That very same day, Bridgepoint reportedly hired JPMorgan and Rothschild to exit French asset management company Primonial. The target, eyed by BC Partners, KKR, CVC and Eurazeo, could be sold for a resounding EUR 2bn.

Last year, France saw a total of 21 buy-outs in the financial services sectors, twice as much as the year prior, according to Mergermarket data. The insurance brokerage sector, with its high profitability levels and potential for consolidation, is particularly attractive to private equity sponsors. Among other insurance related buy-outs last year, Siaci Saint Honoré was acquired  by  Charterhouse and Odealimwas acquired by TA Associates.

Take private deals on the rise

But CVC’s acquisition of April also sheds light on a wider trend: the rise of take private transactions across Europe.

Private equity firms in Europe alone raised EUR 439bn between January 2017 and December 2018, according to Unquote, leading to record amounts of dry powder. And private markets do not have the capacity to absorb these volumes overnight.

As cumbersome as delisting a company might seem, it is quite an effective way to deploy a significant chunk of capital in just one transaction.

In 2017, CVC set a record for the European PE industry, by raising a total of EUR 16bn for its latest vehicle. Its decision to take both April and Swedish construction products supplier Ahlsell [STO: AHSL] - via its portfolio company Quimper - private in the last two months, therefore, does not really come as a surprise.

Some other situations might pave the way for potential take-private transactions. Swiss packaging business SIG Combibloc's [SWX:SIGN] underwater IPO might lead various funds to formulate takeover offers. CVC, Bain Capital, BC Partners, Partners Group  and PAG all considered the asset when it was put up for sale by New Zealand-based group Rank in 2014, as reported. Similarly, UK-based spread betting company CMC Markets's [LON:CMCX] recent share plunge could put the company in the takeover spotlight, as reported.

Could other sponsors decide to give them a try? 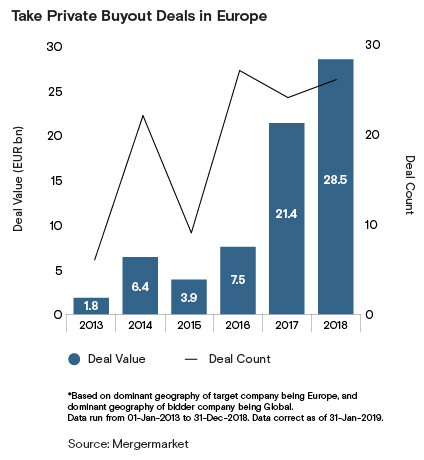 Last year, Europe saw a total of 26 Take Private deals, which is two more than the previous year, and just one short of the 27 that took place in 2016, the highest record year since the financial crisis, according to Mergermarket data. But these deals represented a total value of EUR 28.5bn last year, or almost four times the amount that such transactions represented back in 2016 (EUR 7.5bn).

US investors were responsible for almost half of the European take private deals struck last year, for a total value of EUR 16.6bn.

by Alexandre Rajbhandari, with analytics by Mate Taczman.

Selection of take private deals in Europe since 2018