For Andres Manuel Lopez Obrador, the third time could be the charm.

In his third consecutive run at Mexico’s presidency, the 64-year-old leftist holds a comfortable lead in the polls ahead of Sunday’s election. Known for his frugality and off-the-cuff remarks, he has made his political career championing for the poor and the revitalization of state-owned entities.

Unlike the outgoing President Enrique Pena Nieto, who pushed for the historic opening of Mexico’s energy sector to private and foreign companies in the hope of reversing its declining oil production, Lopez Obrador - popularly known as AMLO - believes state-owned Petroleos Mexicanos (Pemex) should play a central role in the country’s oil and gas industry.

AMLO wants to revamp Pemex’s six existing refineries, which are operating at their lowest level on record, and build one or two new ones to turn Mexico from an oil-exporting country into a fuel-producing one.

And while the candidate’s nationalist vein has rattled local business trade groups, it could help spur Mexico’s meager domestic M&A market, which recorded only 20 deals last year, the lowest number in the last eight years, according to Mergermarket data. 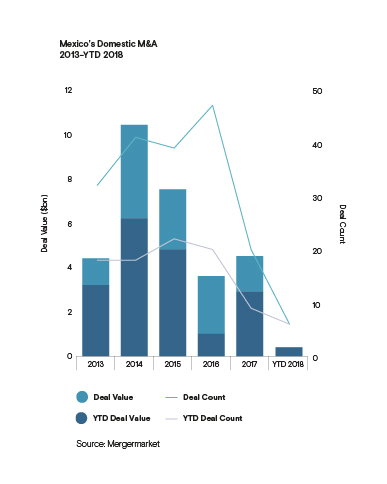 AMLO’s conflicting statements about whether his administration would launch new oil auctions, for example, could stimulate the country’s fledging upstream energy sector.

Locally listed companies have been beefing up their war chests in anticipation for what may lie ahead. They sold MXN 159bn (USD 7.9bn) worth of corporate debt from January to May, a 172% jump from the first five months of 2017.

AMLO’s general distrust of foreign capital, coupled with the stalemate in talks to renegotiate the North American Free Trade Agreement, could also lead to an increase in inbound M&A deals as international companies jockey to have a presence in Mexico.

Poplar Bluff, Missouri-based Mid-Continental Nail, the US’ largest nail manufacturer, for instance, recently said it could shift production to Mexico after the steel tariffs imposed by the administration of President Donald Trump forced it to jack up prices, leading to a 50% drop in orders.

Last year, Mexico’s inbound M&A from the US reached USD 1.9bn, the second-lowest level in five years, according to Mergermarket data. 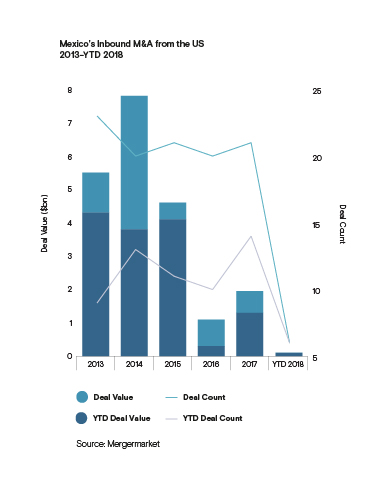 In the end, however, it is yet to be seen whether AMLO’s lead in the polls will translate into a victory and whether his administration will pursue a hard nationalistic agenda or a more moderate approach.

by Carlos Martinez in Mexico City, with analytics by Elizabeth Lim