France’s political volte face – apparently at the heart of the collapse of the Fiat Chrysler Automobiles [NYSE:FCAU] and Groupe Renault [EPR:RNO] tie-up – has added to the maelstrom of confusion for European M&A practitioners hoping to navigate waves of populism and economic nationalism.

So, is France slipping into old habits, or is something specific at work?

President Emmanuel Macron has been tubthumping the need for European industry champions. Supportive of the Alstom/Siemens deal killed in Brussels, Macron had also seemed to rubber stamp the Fiat/Renault tie-up. Finance minister Bruno Le Maire was given the green light to support the merger, crucial for it to go ahead given France owns a 15% stake in Renault.

But having drafted a list of commitments the merged entity would need to abide by to secure French government support, the Macron administration appears to have wrongfooted all parties with its request to delay a board vote on the merger in order to consult with Japanese colleagues. Renault’s alliance with Nissan had been a key area of uncertainty were Fiat/Renault to complete.

Fiat threw in the towel, arguing “political conditions in France do not currently exist” for the deal to go forward.

Macron – the former investment banker president championing economic liberalisation – ends up stymying a deal in a fashion akin to so many dirigiste French presidents of the past. Meanwhile, Italian Deputy Prime Minister Matteo Salvini – hard right nationalist scourge of globalised finance – lamented the collapse of a cross-European project.

Yet panellists at Mergermarket’s M&A Executive Club conference in Paris last month praised Macron’s defusing of the populist gilets jaunes protests via limited fiscal generosity, rather than an abandonment of his liberalising reform agenda. They were convinced that France is becoming an increasingly popular place to lure investment from overseas. 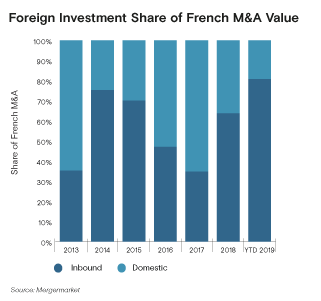 Last month, President Macron’s declaration that “European naïveté” needed to be replaced by stricter, Europe-wide oversight of Chinese investment in the continent could be lumped with the politically-charged collapse of Fiat/Renault as evidence of France returning to the old playbook.

But Chinese investment with Central Committee strings attached has been viewed as a national security risk on the left and right.

Equally, if wanting to suit up against Chinese state-backed economic power games, it would seem prudent to ensure Japan remains onside as an Asian ally. The game’s afoot to become Japan’s primary territory for European investment now that Shinzo Abe’s administration and domestic companies have lost faith in a British government hellbent on a hard Brexit.

And a look at the deals that have completed point to a France boasting forward-looking corporates that are attractive to overseas investors willing to put capital to work in what is considered a stable economic and political environment.

But they may paint the more accurate picture of France as a place to do deals.