Germany is proud of its automotive industry; its small and medium-sized enterprises make up the backbone of Europe’s manufacturing landscape. From production, supply chain management and distribution, Germany’s ‘Mittelstand’ companies predominantly occupy the industrials sector.

While Europe drifts towards uncharted waters, where Brexit will alter the trading landscape indefinitely, the US and China are exhausting their own war of words and tariffs. Both of these will have a marked impact on Germany’s auto industry.

The sector saw 43 deals worth a combined EUR 3.6bn down from 50 deals worth EUR 5.9bn a year earlier. A lack of EUR 1bn-plus deals last year played a part in this downfall as just one came to pass compared to three such transactions in 2017, according to Mergermarket data. 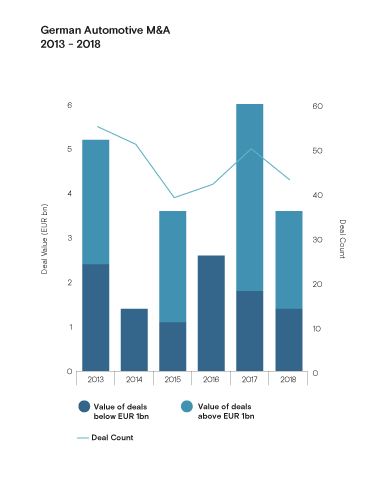 The sector had already been hit hard by the headline-grabbing 2015 diesel emissions scandal where Germany’s Volkswagen [ETR:VW] was a crucial offender. Economically, this breakdown recovery has not been plain sailing, particularly due to its implications and negative impact on climate change. While a push towards more costly alternative options like electric and hybrid vehicles is well-received, these cars are not yet achieving sales targets.

And the repercussions for German industry are massive. One in four jobs in Germany are connected in some way to the traditional auto sector, so concern is bound to spread when Europe’s biggest carmaker, Volkswagen, anticipates another year of “enormous challenges” as deliveries decline in a contracting market, according to COO Ralf Brandstaetter.

But some big auto deals still wait in the wings, including carve outs such as Continental’s Powertrain unit, together with Volkswagen’s Traton (truck & bus) unit. Yet others, such as last year’s proposed sale of Leifeld Metal Spinning, a machine builder and supplier to the auto industry, to a Chinese buyer, was blocked by the German government.

Atop of this, the German economy is facing a potential downturn this year. Politically, change is on the horizon after Chancellor Merkel was forced to announce she will step down in 2021, following state election setbacks.

Additionally, Mario Draghi’s term as president of the ECB expires at the end of October 2019, and it remains far from certain that he will ever raise rates during his tenure. While change can be positive, uncertainty over who takes the helm and what happens next could hinder the economic outlook.

Dealmakers are predicting a US-led recession in 2020, which could domino across global financial markets. Any Brexit outcome will unlikely improve the situation due to close links between assembly plants and suppliers on both sides of the English Channel.

And then there are the trade links with the US and China. These are integral to Germany’s automotive success, and the threat of a global recession will in turn directly affect imports and exports from Mittelstand firms.

Indeed, trade tensions with the US contributed to Chinese sales last year declining for the first time in two decades.

Wider Chinese investments into Europe has mirrored that seen in the auto sector and spiralled. Last year, six such deals totaled EUR 868m, a far cry from 12 months earlier when a dozen deals equalled EUR 3.8bn. Further such evidence was seen this morning when Chinese automobile group, Geely Group, denied that it had divested shares in Germany-based car maker Daimler [ETR:DAI].

Additionally this week, Ford [NYSE:F] announced cuts to thousands of jobs across the UK and Europe, Honda[TYO:7267] said it will halt production at its UK plant for six days after Brexit in an effort to “facilitate production recovery activity following any delays at borders on parts”, and yesterday, Jaguar Land Rover, owned by Tata Motors [NYSE:TTM] announced it will cut a further 4,500 jobs.

Indeed, a flagging UK auto market has held back sales growth in Europe, according to the European Automotive Manufacturer’s Association. So while hopes of a full automotive recovery for Germany are sparse, the question is what is required to keep the wheels on track.

by Emma-Victoria Farr in London and analytics by Olivier Gilkinet