Osram weighs up watts what

Osram weighs up watts what

When a company’s share price falls more than 50% over 10 months, does it sound alarm bells or flicker ‘buy-me’ eyes to an admiring fleet of suitors?

In the case of Osram [ETR:OSR], which spiralled to EUR 30.64 in October 2018 from a high of EUR 77.64 in January the same year, it has captured the attention of Bain and Carlyle, now weighing a joint bid for the company. What do they see that can be turned around?

The private equity firms are reportedly interested in Osram’s long-term potential as it ramps up manufacturing LED lighting for cars and moves into areas including horticulture lighting and consumer electronics. Osram is transforming away from lighting and luminaries to become “a high-tech photonics company” selling internet-connected lighting services that gather and analyse data, which to an investor may garner more promising growth than a company selling light bulbs.

Osram’s stock closed up 14.3% on confirmation of Bain and Carlyle’s talks, reaching its highest level in 10 weeks. There are many frustrated shareholders keen to sell, dealmakers have said, adding that Osram operates in a highly competitive and fragmented lighting sector, where it needs to continue differentiating itself to perform and succeed. Having already been a unit of Siemens [ETR:SIE] and having had a stint as a public company since July 2013, will change and related growth be more likely under private equity ownership?

One option to improve Osram’s performance may be to separate its divisions. Osram is organised into three parts: Osram Opto Semiconductors, Specialty Lighting and Lighting Solutions and Systems. In FY18 ending in September, the three divisions accounted for 42%, 54% and 24% of revenues, respectively.

With private equity at the helm, such a break up may be a more practical, and ultimately profitable direction for the company to follow.

Additionally, trade sales in Germany across all sectors fell in both value and count for the second successive year in 2018, accounting for 64% of deal flow last year, according to Mergermarket data. Conversely, German buyouts across all sectors reached the highest buyout activity by volume on Mergermarket record, with 201 buyouts worth EUR 20bn taking place. As reported, take private situations have also soared in recent years, as companies are rescued from performing poorly on the stock markets, adding further weight towards a sponsor-led process perhaps having the upper hand. 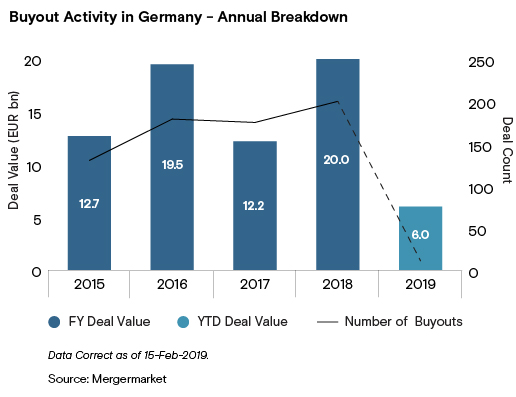 Panasonic [TYO:6752] may be one strategic interested in Osram, as it reportedly searches for targets in the housing and automotive sectors, as reported by this news service.

Panasonic was involved in the sale process of ZKW Group, a lighting business based in Austria, according to media reports in 2017. ZKW was eventually acquired by LG Electronics [FRA:LGLG] for EUR 1.1bn, in a deal which completed in April 2018. During the process, Panasonic reportedly moved some of its M&A capabilities to Europe through the establishment of a Dutch subsidiary in order to improve its deal-making capability in the region.

In 2016, Sanan Optoelectronics [SHA:600703] held preliminary contact with Osram over a potential acquisition.

And then there is Signify [AMS:LIGHT], number one in the global LED market ahead of Osram. Signify, previously Philips Lighting, is also languishing and trades at an even lower valuation than Osram. Former parent Royal Philips [AMS:PHIA] is still sitting on an 18.3% stake, as reported.

Osram’s quarterly revenue has decreased by around 15% year-on-year to EUR 828m with the adjusted EBITDA margin at 11.3%. Net debt increased from EUR 51m as of 30 September 2018 to EUR 172m as of 31 December 2018, mainly impacted by about EUR 100m of negative free cash flow, as reported by Dealreporter analytics.

So, wherever Osram next ends up, owners may have to work hard to ensure the lights don’t go out on an asset that has recently seen its fair share of flickering prospects.