The gold mining sector is littered with junior miners and single-mine companies that, in a previous era, might have been acquired by majors as soon as they made a big discovery, obtained a key permit, or entered project financing to build their mine

For their part, majors have been M&A shy in a world of unexciting gold prices and risks everywhere you look: jurisdictional, political, operational, financial.

But the market has reached a point where gold may regain some of its shine after years dominated by FAANG stocks, cryptocurrency and cannabis. Investment is expected to flow into precious metals, and even more so if equities maintain their bumpy slide.

Two major-on-major stock transactions indicate gold M&A may pick up, even if not in the way some smaller miners wish it would. Barrick’s [NYSE:GOLD] USD 18.3bn, no-premium merger with Randgold last September, and Newmont Mining’s [NYSE:NEM] USD 10bn acquisition of Goldcorp [NYSE:G], announced on 14 January, will create two new global gold giants with a range of tier one operational mines and earlier stage projects in the pipeline. Players on both sides cite synergies, cultural fit, and strong management as rationale for their deals, and both have ample divestiture opportunities that will allow them to keep only the cream of the crop.

Since 2017, there have been 39 transactions involving targets valued USD 300m or above, altogether worth USD 46.5bn, according to Mergermarket data. Of these, 11 involved gold mining companies worth a collective USD 22.9bn. This accounted for 49.5% of total metal ore mining activity for this period by value, and 28.2% by deal count. 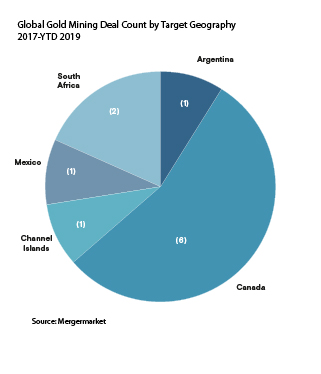 There could be macro rationale driving gold M&A, or a competitive manoeuvre first on Barrick’s part, now Newmont’s, to be the biggest. But if there is, executives aren’t saying so. Newmont CEO Gary Goldberg would not be drawn into such questions during the company’s post-deal conference call last week, only saying that the combination would be accretive to shareholders and create a market-leading portfolio. Goldberg noted on the call that the combined company will be positioned “to thrive through the cycles”.

Barrick CEO Mark Bristow was similarly circumspect, mentioning synergies and top-tier mines, Barrick’s improved financial metrics, and a global asset base in a conference call after that deal announcement.

Certainly, many factors have been at play: cultural fit, management succession, and the majors’ need to replenish production after years of too-conservative investment in growth. But macroeconomic factors point to a strengthening commodity price environment, which could lead to further deals in the sector.

The “buy low, sell high” dictum applies no less in commodities than anywhere else, although achieving that in practice is another story. Analysts have been issuing reports for at least a year proclaiming an imminent rise in the gold price, and it has not quite happened yet. Gold has tapped highs of USD 1,350 and lows of USD 1,150 in recent years, spending much of the time around USD 1,200.

Copper, base metals, rare earths, coal and steel are linked to economic growth, while precious metals’ dissociation from industrial production make them a haven for investors during hard times. Geopolitical risk and currency uncertainty are also factors that push investors, and acquirers, toward hoarding more of the yellow metal.

There are a lot of “ifs” that could line up over the next few years to prove out the timing of these deals: if a global economic slowdown or recession materializes, if equities fail to provide returns, and if gold prices rise in concert with these events, these dealmakers could seem wise. However, wide ranging predictions can fall flat, as any forecaster knows.

by Hana Askren with analytics by Elizabeth Lim

Hana Askren is a Senior Reporter in New York for Mergermarket’s energy team. Hana joined the company in 2007 as the markets began to crash, and has covered the energy and infrastructure industry through the credit crisis and through the ups and downs in oil and gas prices. Prior to joining Mergermarket, Hana completed an MA in Arabic Literature at McGill University and trained as an Olympic hopeful in freestyle wrestling.

Hana Askren is a Senior Reporter in New York for Mergermarket’s energy team. Hana joined the company in 2007 as the markets began to crash, and has covered the energy and infrastructure industry through the credit crisis and through the ups and downs in oil and gas prices. Prior to joining Mergermarket, Hana completed an MA in Arabic Literature at McGill University and trained as an Olympic hopeful in freestyle wrestling.