Dealmakers do not associate the cautious economic outlook in Germany as an inhibitor to M&A activity in 2019.

These sentiments were shared in a new report released by Allen & Overy at the Mergermarket Germany Forum in Dusseldorf. The survey asked 100 German dealmakers about the prospects for domestic and cross-border M&A activity in the year ahead and comes off the back of €100bn of M&A deals being announced in 2018.

Chart: Data from Mergermarket shows over €100bn of M&A deals were transacted in Germany in 2018.

An uncertain global macroeconomic outlook was flagged as the top challenge to transactions for German M&A. However, 61% of respondents say they expect to be mandated on more M&A deals compared to the previous 12 months. A similar number (62%) say they expect the level of cross-border dealmaking with China to increase in 2019 versus last year, despite a slowdown in Chinese demand.

The consensus is also that economic headwinds will not restrict the availability of debt financing in Germany, as only 4 out of 10 respondents expect financing conditions to get harder in 2019. 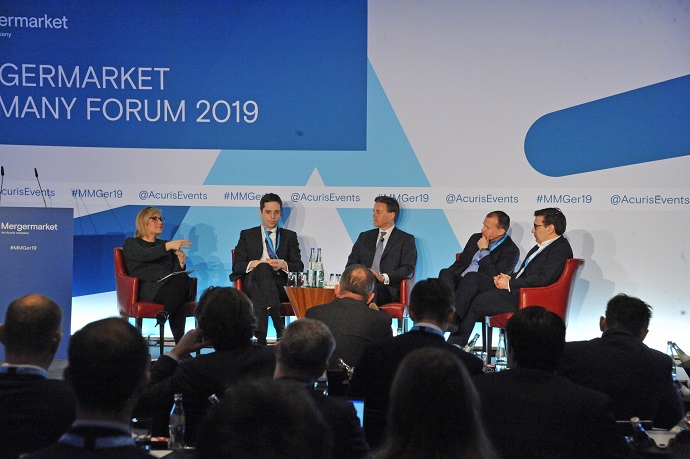 One reason is that direct lending funds, private debt managers offering bespoke debt financing as an alternative to traditional bank debt, have gained market share in Germany. Data from Debtwire shows that the number of unitranche deals in Germany, Austria and Switzerland in 2018 outstripped bank deals for the the first time.

The survey suggests that the flexibility on offer by institutional lenders compared to banks makes them more attractive lenders – with 61% of respondents citing the ease of refinancing with debt funds as a reason private equity owners choose to opt-for this financing solution.