The value of M&A in the European industrials & chemicals (I&C) sector fell 23.9% in 2019, as dealmakers looked to navigate the murky waters of a potential hard Brexit and alleviate fears of supply chain disruption caused by trade war concerns.

I&C activity in Europe stood out against the US, Asia (exc. Japan) and Rest of the World (RoW) as the only geography to see its deal value fall, according to Mergermarket data. Europe accounted for just 20% of global I&C value due to a 30.7% slump versus 2018 in the number of transactions over 1bn. RoW value almost doubled to EUR 93.7bn as a result of Saudi Arabian Oil Co.'s purchase of a 70% stake in SABIC.

Based on deal volume, however, European I&C was in touching distance of new record high. The region took its second-highest share of all global I&C transactions at 42.3% in 2019 – just shy of the 42.7% record set in 2018.

I&C deals in Europe amounted to EUR 96.2bn in 2019 and witnessed its quietest 3Q in the past five years. Deal volume was down 12.38%, but remained in touch with the overall global I&C picture, where the count fell by 11.5%.

To some surprise, the European Automotive space recorded its most valuable year in the past five years. Automotive deal value saw a whopping 67.57% increase year-on-year (YoY) to reach almost EUR 30bn and 140 transactions.

“Though it is quite dramatic, I am not surprised by the increase in automotive value,” Constantine Biller, industrials & chemicals partner at Clearwater International, said. “The transactions happening now in the automotive industry involve the really technologically differentiated targets with the capabilities in autonomy and electronics that are so sought after.

“Inevitably, these transactions come with valuations that are not normally associated with the automotive industry. In fact, multiples are getting closer to the typical multiples for pure technology companies,” Biller added.

Against the backdrop of 2018 as a bumper – and indeed outlying – year for global M&A, I&C continued to hold its own.

The sector outperformed other spaces by clawing a 19.9% share of all deal volume across Europe last year, where it was trailed by TMT and Business Services. In terms of value, I&C garnered 13.8% of all cash spent – only pipped to the post by dealmakers in the Pharma & Healthcare and TMT spaces.

In the regional breakdown, the German speaking countries retained the lion’s share of both value and volume, taking 30.2% and 23.7% respectively. Besides the ZF-WABCO transaction, DACH saw four other billion-plus tickets, which were underpinned by ams' [VIE:AMS] bumper EUR 4.6bn offer for an 80% stake in lighting manufacturer Osram and the EUR 3.17bn divestment of BASF Construction Chemicals to private equity firm Lone Star Funds.

In a sign that it is ‘open for business’ following Brexit, the UK & Ireland commandeered 15.8% of all I&C deals across the region – showing the continued strength of British engineering in the process. 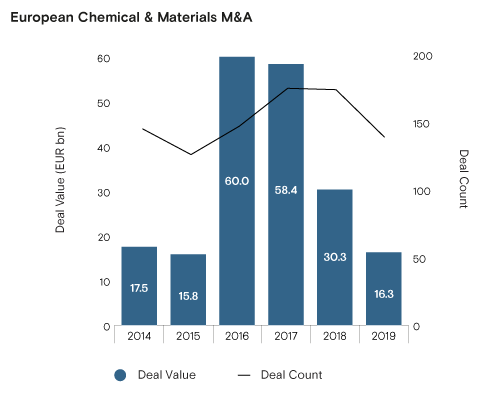 As expected, it was hard to fault the appetite of private equity houses for I&C deals. The value of PE buyouts in European I&C totaled EUR 24.4bn for 2019, which – though down 26.9% on 2018 – remained largely in touch with the overall five-year PE buyout picture.

On the other hand, the number of sponsors looking to exit shrank, with exits falling 22.5% from 222 in 2018 to 172 in 2019. With record amounts of dry powder, private equity firms are looking to hold onto their investments for longer, which Clearwater’s Biller says is in the hope of “another half-a-turn” on multiples paid during 2020.

“The number of sizeable, truly differentiated and important targets for trade buyers is diminishing, so PE firms might just be prepared to pay slightly more for these important targets,” Biller added.

Return to the “tried-and-tested”

European M&A could begin to look forward to calmer waters in 2020 as the market takes stock of increased transparency on the macroeconomic level, dealmakers told Mergermarket.

“I would anticipate Europe’s broad industrial players to look more positively at M&A in 2020, with positive signals on US-China trade negotiations ahead of the upcoming US presidential election and more clarity around Brexit following the UK general election last December,” Charles Montgomerie, head of industrials at Greenhill, said.

Providing that the demand for high-quality engineering and manufacturing ability is sustained, companies and sponsors should be able to continue benefiting from M&A as an avenue for profitable growth and as a tool for consolidation across portfolios and geographies.

Record amounts of sponsor dry powder is also likely to continue fueling interest in the sector, with private equity houses eyeing take-private opportunities as a means to capitalise on further expansion in takeout multiples.

“Sponsors will, however, be increasingly conservative on cyclical assets,” Montgomerie added.

Private equity should also continue to enjoy a large pool from which to choose their targets. The number of carve-outs across European I&C was a key feature of the sector in 2019, with KPS Capital Partners’s EUR 1.6bn buyout of Howden Group and the aforementioned BASF Construction Chemicals being particular highlights.

“Smaller carve-out situations are also playing to the newer breed of PE firm, the ones that are focused on complex transactions and longer-term holds,” Biller said. “There is a real place for these alternative houses, since they take a different approach to new investments – often with no exit horizon and with a hands-on approach to carve-out issues.

“As a result, the likes of Aurelius, Mutares, Rubicon Partners and Serafin are likely to turn into the new industrial holding companies,” Biller added.

Strategic players and sponsors alike will be sure to sound out the market for what other bidders are likely to pay. Peers might just be prepared to pay slightly more for a solid business that is capable of withstanding a secondary or tertiary private equity transaction.

The UK industrials sector could be particularly active into 2020, according to Ian Hart, co-chair of UK investment bank at UBS. “There is certainly US interest, though security and jobs will be important priorities in terms of a political backdrop,” he said.

Advent International sparked outcry last year after the American private equity firm announced plans to acquire UK defence contractor Cobham [LON:COB] for GBP 4bn. Lady Cobham, daughter-in-law of the firm’s founder, challenged the UK Government on whether a private equity firm with limited experience in the defence sector should be able to access Cobham’s “sensitive technology,” according to press reports.

If the top end of the market is any barometer, it could well be the case that collaboration is the best medicine for some parties. A combination of ambitious vendor price aspirations, the availability of cheap debt and a continuation of strategic buyers seeking to prevent the competition from seizing key targets could put I&C on a footing for an uptick in overall valuation.

The permeation of automation will continue to be a key driver for I&C M&A, with strategic players further realising the value in positioning their offering as a solution-as-a-service model that can often attract more lucrative contract terms.

Above all, it remains that I&C might well be its own safe haven in the M&A universe. “Strangely, I think the whole world is coming back to more core, more traditional activities,” Clearwater’s Biller said. “People are returning to the tried-and-tested industrial markets."

by Ryan Gould in London, with analytics by Olivier Gilkinet