“Value was down given the absence of mega deals, but it was a very good year for deal activity,” Nicholas George, UK TMT leader at PWC, said. “Private equity firms were very busy in general, while corporates focused on strategic plugins or portfolio clean up,” George added, citing the sale of BT’s [LON:BT.A] fleet business to Munich-headquartered financial sponsor Aurelius in August as an example.

The UK took the largest share of TMT M&A in Europe, making up 30% of the total European deal value thanks to deals such as Just Eat’s [LON:JE] EUR 7.4bn merger with Takeaway.com [AMS:TKWY], one of the largest TMT transactions of 2019.

The deal aims to create one of the biggest players in the online food delivery market to rival Uber Eats and Amazon-backed [NASDAQ:AMZN] Deliveroo, and saw Takeaway.com claim victory over Naspers-owned [JSE:NPN] Prosus in one of last year’s fiercest takeover battles. The UK competition authority recently launched an investigation into whether the deal would result in substantial lessening of competition in the UK market.

In another high profile deal of 2019, German Online marketplace Scout24 [ETR:G24] sold its car trading platform AutoScout24 to previous owner Hellman & Friedman (H&F) for GBP 2.5bn (EUR 2.9bn). The deal followed a failed bid last May by H&F and Blackstone to buy the whole business and has turned the spotlight on Auto Trader [LON:AUTO], Rightmove [LON:RMV] and the remainder of Scout24 [ETR:G24], which could also attract private equity firms interested in their cash generation and market leading positions. 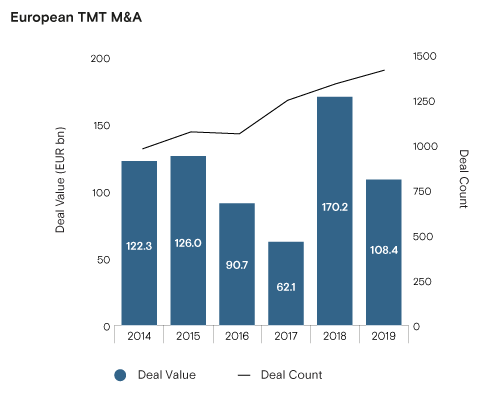 Examples in the year include Ascential [LON:ASCL], the UK information group formally known as EMAP, which made acquisitions to extend its reach beyond publishing and events, he added.

“There are also lots of relatively young fast-growing tech businesses coming to market and being highly sought by private equity firms”, Olivier Wolf, head of TMT for EY-Parthenon, added.

The value drop was partly due to a number of large expected deals falling through last year, including Swiss telecom operator Sunrise Communications’ [SWX:SRCG] proposed CHF 6.3bn (EUR 5.5bn) acquisition of Liberty Global’s [NASDAQ:LBTYA]  UPC Switzerland unit, which was cancelled after mounting pressure from shareholders who opposed the price tag.

Sunrise could make a second attempt following CEO Olaf Swantee’s departure earlier this year, and given the merger’s strong strategic rationale, as reported.

The deal value in 2019 still came higher than in both 2017 (EUR 16.1bn) and 2016 (EUR 15.5bn) thanks in part to some notable take-private deals including the EUR 4.9bn acquisition of UK-satellite company Inmarsat [LON:ISAT] by a private equity consortium consisting of Apax, Warburg Pincus, CPPIB and OTPPB.

The rising valuations in the fibre network and tower space are likely to spur investors to look further afield, including in the CEE region for similar opportunities, Elverston said.

T is for TowerCo

The largest deal of the year was Vodafone’s [LON:VOD] EUR 5.3bn sale of its Italian tower assets to Infrastrutture Wireless Italiane SpA.

“More and more transactions in the coming year will be surrounding tower assets sell-offs as most of the large mobile players have already come out publicly with their desire to do so,” Javier Torra de Silva, global co-head of CMS’ telecommunications group said.

In July last year, Vodafone announced its plan to demerge and potentially list its European tower assets which consist of 61,700 towers in 10 markets, by May 2020. Similarly, French telecoms giant Orange SA [EPA:ORA] has begun considering an IPO for its Middle Eastern and African tower division Orange MEA. Spanish counterpart Telefonica [BME:TEF] has also begun exploring the option of a possible IPO of its Latin American unit valued at EUR 10bn, which includes operations in Chilie, Colombia, Mexico and Argentina.

The potential separation of Telefonica’s tower business could mean that the company will focus on seeking out deals in other regions, Torra de Silva said.

“While its O2 used to be thought of as disposable in the UK, now Telefonica has identified the UK as a key market. We fully expect a U-turn to take place, it wouldn’t surprise me if they look to make cable purchases in the UK,” he added.

Overall deal value in the European media space fell by nearly two-thirds to EUR 20bn in 2019 compared to EUR 59.1bn.

The process concluded over the summer despite investor concerns over the longer-term success of traditional players and the threat technology companies pose to such market research companies. Like many of its competitors, WPP has suffered from shrinking marketing spending in the consumer sector, which makes up a large proportion of the company’s customer base.

Meanwhile, activity in the B2B media, events, information services and publishing spaces remained strong, as strategic and financial buyers continued to pay record valuations for players operating in the space.

Over the summer, LSE [LON:LSE] agreed to acquire data giant Refinitiv for EUR 24.4bn from a private equity consortium led by Blackstone and in May, Charterhouse took Irish events group Tarsus private for GBP 632m and a multiple of approximately 17x average EBITDA.

General Atlantic last October sold a 25% stake in news and pricing agency Argus Media to Hg, valuing the target at more than GBP 2bn – more than double the price GA paid in 2016.

by Amy-Jo Crowley and Charlie Taylor-Kroll in London, with analytics by Thorsten Louie Pedersen

Amy-Jo Crowley reports on M&A activity across the TMT sectors for Mergermarket. Her responsibilities include breaking news on small to large-cap and listed deals, and reporting on corporate strategies. Previously she worked for Progressive Digital Media and The Mail on Sunday in London.

Amy-Jo Crowley reports on M&A activity across the TMT sectors for Mergermarket. Her responsibilities include breaking news on small to large-cap and listed deals, and reporting on corporate strategies. Previously she worked for Progressive Digital Media and The Mail on Sunday in London.