The DACH region saw a softer start to the year, experiencing a dip in deal making, yet still outpacing a subdued M&A market across Europe, according to Mergermarket's 1H19 DACH Trend Summary.

Dealmakers across Germany, Switzerland and Austria are now cautious about what is yet to come for the rest of the year. As a large part of the deals announced in 1H19 had already been prepared for market in 2018, they could be looking at a thinner deal pipeline that in turn could dent M&A activity more significantly in coming months.

Following Q1 with 293 transactions amounting to EUR 50.9bn, Q2 saw a drop to 251 deals worth EUR 37.6bn. The falling trend reinforced a cautious outlook for the remainder of the year as dealmakers see a dwindling number of targets ready to hit the market.

Fewer mandates were awarded at the end of last year which meant a slow start in 2019, said Sascha Pfeiffer, Managing Director at GCA Altium in Frankfurt. This came on the back of “sentiment-dampening factors such as Brexit, China’s declining growth, and trade wars, so the sellers’ position is also affected, making high valuations barely viable,” he said. 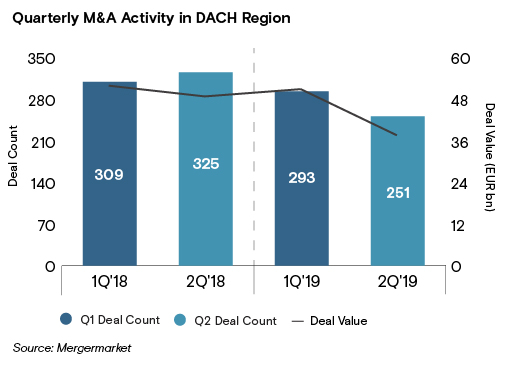 An economic slowdown across markets and stricter foreign investment rules in Germany contributed to a reduced appetite from investors, according to Volker Geyrhalter, M&A Partner at Hogan Lovells in Munich. “Investment activity of international investors from the US and China into Germany has slowed down in recent months,” he said.

Deals targeting Germany collapsed to EUR 29.6bn in the first half of this year, a mere third of last year’s EUR 105bn total, in what was the country’s biggest haul in five years. Only two acquisitions by buyers from outside Europe made the EUR 1bn mark, compared to six last year and eight in the previous year.

"Given this backdrop and declining expectations, many dealmakers will start to brace themselves for bad weather and then wait and see how to do deals," Sven Oleownik, Partner and Head of Gimv Germany said.

The Swiss medical industry, seen as less volatile and a haven in times of uncertainty, registered the largest deals in the region. Pharma group Novartis [SWX:NOVN] spun off Alcon [NYSE:ALC, SWX:ALC] via a dual listing that valued the US eye-care business at CHF 26.9bn. Second place in the charts was Nestle’s [SWX:NESN] carve out of its Skin Health unit to a consortium led by EQT and the Abu Dhabi Investment Authority for CHF 10.2bn.

Switzerland had the lion’s share in deal value, with EUR 58.5bn spread across 92 deals in 1H19. Alongside the two pharma mega deals, the country had another four transactions featuring among the top ten in the DACH region. Germany took the remaining spots, while Austria registered 35 deals worth EUR 410m.

Pharma, medical and biotech deals topped the sector ranking by value, accounting for close to 40% of M&A in the region. Meanwhile, industrials and chemicals recorded 148 deals worth EUR 14.3bn in value, a drop from EUR 19.8bn (from 213 deals) in 1H18. In contrast, deal count in the technology sector reached 17.8% of the total, up from 16% in 2H18, with 97 transactions.

Private equity firms were not as busy as in 2018, which was a notably strong year. Buyouts across the region were down to 93 deals in 1H19 from 126 deals in 1H18. Value reached its highest half-year since the financial crisis, but was largely skewed by EQT’s takeover of Nestle Skin Health.

However, sponsors showed an appetite for larger transactions, which could be explained by the need to deploy dry powder sitting in increasingly larger funds. 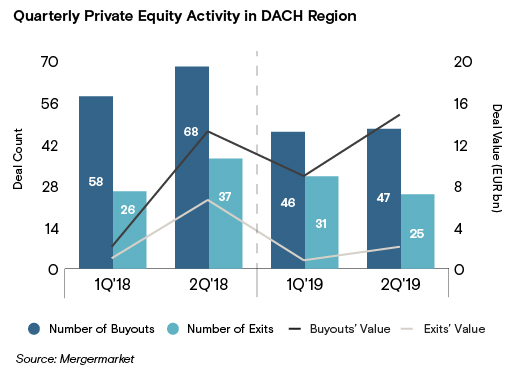 Private equity exits tell a bit of a different story. Sponsors sold 56 businesses in the first six month of this year, compared to a half-year average of 74 between 2015-2018. The value of disclosed exits dropped to EUR 2.9bn from EUR 7.7bn in 1H18.

"We are cautiously optimistic when it comes to private equity transactions for the second half of the year,” said Matthias Jaletzke, Private Equity Partner at Hogan Lovells in Frankfurt. Investors are more cautious in the current environment given the political and macroeconomic uncertainty, he said.

Mismatches between sellers’ and buyers’ price expectations were a continued theme in the year so far, leading to processes being called off, and a possible indication that the market could be turning.

“In Q1 we have seen a number of auctions being pulled due to the lack of demand at the desired price levels offered by sellers,” Jaletzke said.

Examples of this include Partners Group’s [SWX:PGHN] attempt to exit Hoffmann Menue, which reportedly saw sponsors dropping out of the auction after they did not meet the asking price, and EMERAM abandoning the sale of Matrix42 due to disagreements with bidders on how to value the asset, as reported.

Furthermore, a take-private offer for online marketplace Scout24 [ETR:G24] by previous owners Hellman & Friedman and Blackstone failed in May after it failed to reach the acceptance threshold with shareholders. Scout24 is now mulling a separation of its car and property classifieds operations, as reported.

“The reduced appetite of international investors resulted in a slight valuation dip which in our view is a healthy adjustment to what has been an overheated market in recent years,” Hogan Lovells’ Geyrhalter said.

Another common topic clouding deal making have been aggressive EBITDA adjustments, as sellers look to push valuations up, Oleownik from Gimv said. "There is no belief in EBITDA adjustments of this magnitude," he said. Investors are cautious as visibility on earnings is murky and valuations appear to be dropping. "No one wants to lose money, so you hang on to it instead," Oleownik said.

Despite looming uncertainties on the horizon, the region will continue to produce a healthy deal flow, most likely driven by domestic investors, Geyrhalter said. While there are unlikely to be any German to German mega transactions, he expects that the deal-flow will be driven largely by midcap transactions.

The German economy remains stable and, though the country’s GDP may only grow by 0.5% this year, the European Commission estimates a rebound in next year with unemployment declining further.

Technology, business services and healthcare are expected to see a strong deal flow, Jaletzke said. The industrial sector is likely to see lower levels of activity. Automotive has become a no-go industry for private equity funds, and strategic players have also been more cautious with it as the sector undergoes deep transformation, Pfeiffer from GCA Altium said.

Corporate carve-outs are expected to be another deal driver in the coming months as markets move from an upswing to a downswing and dealmakers seek transactions with less risk.

Ongoing carve-out situations include BASF’s [ETR:BAS] process to sell its construction chemicals unit which could fetch USD 3bn, and Lonza’s [SWX:LONN] plan to divest its speciality ingredients business segment, which generated turnover of CHF 2.4bn in 2018, as part of ongoing restructuring. In May, the board of Siemens [ETR:SIE] approved plans to spin off and list its Houston-based Gas and Power business into a new company.

At the top end of the market, the pipeline has looked fuller in the past but there are a handful of ongoing situations that should keep dealmakers busy. These include German e-commerce payment service provider Heidelpay, being sold by Anacap in a process that could value it at EUR 700m-EUR 800m, and TOI TOI & DIXI, a German portable toilets maker, that has reportedly attracted the interest of large sponsors.

The takeover of German lighting firm Osram [ETR:OSR] by a consortium of Bain Capital and Carlyle[NASDAQ:CG] will also boost deal value in the region once completed. Its board supported the offer which gives the business an enterprise value of EUR 3.7bn.

After a few bullish years, prudence is likely to be the dominating factor for the remainder of 2019. Companies and funds are focusing on making their portfolios watertight, Oleownik said. Instead of overburdening management with add-on acquisitions, at this time it may be wise to integrate what has been bought and streamline capacities, he said.

by Emma-Victoria Farr in London and Johannes Koch in Berlin, with analytics by Olivier Gilkinet