M&A across Europe‘s German-speaking region has ticked along steadily this year. On the surface it was business as usual, at a time when macro events buzzed chaotically nearby.  Dealmakers are taking advantage of a seller’s environment while it lasts, but how long that will continue is another matter.

As a collective, Germany, Austria and Switzerland have pushed valuations north, which has resulted in EUR 95.6bn changing hands across 532 deals. This compares with EUR 161.7bn generated from 1262 deals in FY 2017, according to Mergermarket data.

This has been reinforced by the growing presence of private equity players taking part in processes across the region, Juergen von Wendorff, Managing Director at HANNOVER Finanz and Member of the Board of Directors at BVK (German Private Equity and Venture Capital Association) says. Competition between corporates and private equity remains strong and boosts valuations, he suggests.

During the first six months of 2018, many transactions took place in the small and mid-market space, von Wendorff says. Given a generally unchanged economic and political situation, von Wendorff expects this to continue.

Seehofer, also head of the Bavarian CSU party, is a key figure in the centre-right alliance that forms Merkel’s coalition government and has been a force in German politics for almost 70 years.

While the situation has been resolved with an agreed border control deal, coalition splits are something Merkel will want to avoid as they add to uncertainty which could impact on business.

Private equity is investing in a wide range of sectors with a traditional focus on business products and services, as well as consumer, von Wendorff says. “There is increasing attention towards technology and service-based companies, for example in IT and in healthcare.” 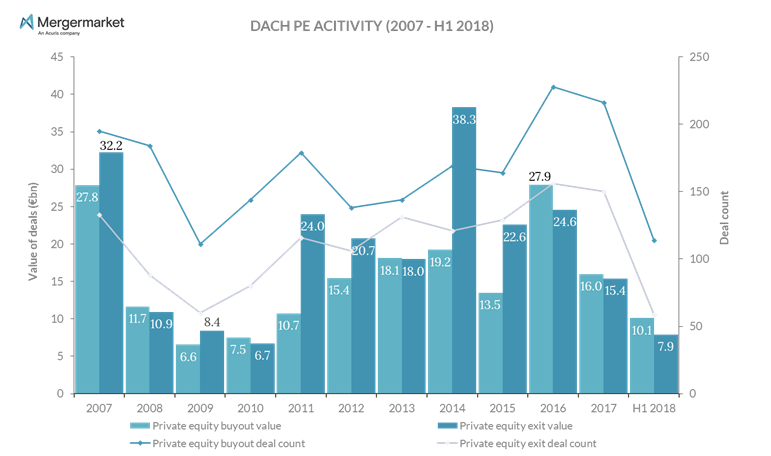 Business-services deals values have leapt 449%, despite five fewer deals being conducted compared to the equivalent period last year, according to Mergermarket data. The construction industry saw an equally impressive 278% increase in deal value over the same timeframe.

Valuation figures in Energy and Telecommunications have been enhanced by larger deals, such as the EUR 37.9bn sale of innogy [ETR:IGY] by RWE [ETR:RWE] to E.ON [ETR:EOAN]; Liberty Global’s [NASDAQ:LBTYA] EUR 18.4bn sale of its Eastern European assets to Vodafone[LON:VOD]; and Macquarie Infrastructure and Real Assets (MIRA)‘s EUR 4.6bn sale of German metering business, Techem, to a consortium of investors led by Partners Group [VTX:PGHN].

“German companies are more open to private equity compared with five years ago and seek out financing partners to back their growth, international expansion or succession plans,“ he says.

Competition among private equity firms looking for the best companies will remain due to an increasing number of funds entering the market, including foreign and German newcomers. This will lead to more secondary transactions, which now constitute one third of all transactions, von Wendorff says.

Christine Weiss, Partner at HQ Equita offers the opinion that robust economic development and low interest rates combined with high liquidity in the market are behind Germany’s buoyancy.

While a short-term negative market shift seems unlikely, political uncertainty poses a potential risk in businesses and dealmaking. This is especially true in the case of protectionist measures, such as tariffs enforced by the US government. Also, volatility within the German coalition adds risk to future development, Weiss says.

While auction processes in Germany are still international, people are more cautious when undertaking a deal with foreign investors, Franz-Josef Schoene, Partner at Hogan Lovells says.

CFIUS (Committee on Foreign Investment in the United States) does not only apply to transactions in the US but also in foreign jurisdictions which could impact on the US, for instance, meaning foreign trade law applies alongside merger control, he says.

It is not the will of the companies that has changed, but legal frameworks that have made corporates more aware of the issue, he suggests.

However, Belgian transmission system operator Elia System Operator [EBR:ELI] pre-empted acquiring the 20% from Australia-based private equity IFM Investors. This occurred after the German government intervened and contacted other investors to see if they would be interested in the stake, he says. Elia paid a total consideration of EUR 976.5m, according to Mergermarket.

In 2016, the German government appealed to local investors to compete with Midea Group’s [SHE:000333] bid for German robotics firm KUKA [ETR:KU2], but no investor could match the Chinese electrical appliance manufacturer’s interest which valued an 86.5% stake at EUR 4.1bn.

Legal frameworks have increasingly been subject to political influence in businesses across the IT, energy and aerospace sectors, Schoene says. It seems more unlikely now that deals of the magnitude of KUKA with foreign investors would secure regulatory approval, given the high levels of scrutiny.

Government and regulatory bodies need to ensure promises will be fulfilled and there should be an opportunity to step in, Schoene says. But with the appropriate regulatory framework there should be no influence on deal making that should rely on usual market practices.