Sweden's worst half-year performance since 2013 has been instrumental in driving down Nordic M&A values 34% during H1, Mergermarket's 1H19 Trend Summary shows. Just EUR 33.1bn was spent across 548 deals, which represented a further fall when compared against the 624 transactions last year.

In isolation, Sweden and Denmark registered underwhelming figures, yet some comfort may be taken when pitched in the context of a global 11% drop in M&A.

While Chinese investment into Europe has fallen drastically to a mere EUR 3.2bn from EUR 8.2bn during 1H18 and EUR 20.8bn in 1H17, the Nordic region has instead significantly increased. 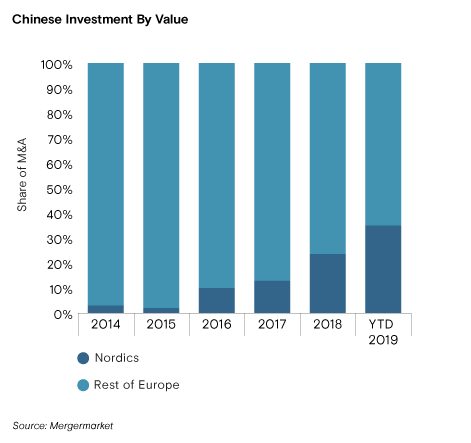 Relative macro-economic stability remains a core characteristic of the Nordics. While the rest of Europe has experienced high levels of uncertainty due to political factors including Brexit, US and Chinese trade, and southern European instability, the Nordics provide a stable and attractive economic environment, Staffan Melinder, Managing Partner at Nordic Capital, said.

Private equity buyouts and exits are also down, although both saw a slight upswing during Q2 from their exceptionally low Q1 and recorded EUR 462m and EUR 839m respectively. The total Nordic buyout market was valued at EUR 6.4bn spread across 85 deals in H1, compared to EUR 7.8bn across 108 deals in 1H18, while the exits totalled EUR 12bn spread across 70 deals, compared to EUR 9.8bn over 73 deals.

With 182 deals totalling EUR 9.8bn, Sweden reported its lowest deal volume for five years, and deal value edged to its lowest point since 2013. The figures look especially low next to last year’s 227 deals and EUR 26.3bn value, but 1H18 – and indeed 1H17 – was always going to be hard to beat.

After several years of very strong activity in Sweden, there are signs the market is reaching the end of its business cycle, Kristoffer Melinder, managing partner at Nordic Capital, and Niklas Karnros, director at PwC Corporate Finance Sweden, said.

Sweden relies heavily on exports, which impacts M&A, Karnros said, adding that the macro-political and economic backstory of Trump remains alongside China and Brexit, but there is no specific event or issue that could explain the drop single-handedly.

The economy is still running at a high, but not at full capacity, Melinder said, and there is a natural wariness around highly cyclical businesses. Private equity investors have become quite cautious after a long and strong run in the Nordics, he said.

Corporates and sponsors have still been eager to engage in M&A this year, and many companies are reporting solid balance sheets, interest rates remains low, and private equity firms are managing to raise new and larger funds, which suggests the underlying M&A market is strong, Karnros said. There is an abundance of capital in the market, with low interest rates and willing debt financing, Melinder said, adding that valuations continue being toppy while general economic growth remains relatively low.

Sponsor-led M&A will likely be sought in sectors that ride mega trends and/or are non-cyclical, particularly in TMT, Karnros said. And there is continued high M&A activity in owner-managed companies driven by succession.

Corporates in cyclical sectors are opportunistic, looking for consolidation rather than entering new markets or product segments, Karnros said. The streamlining trend has continued and corporates also have started to divest less sizeable non-core assets, Karnros said. Companies including construction firm NCC [STO:NCC], mining machinery and service group Epiroc [STO:EPI], and industrial groups Sandvik [STO:SAND] and Electrolux [ELUX:STO] have been or are streamlining, as reported.

On the ECM side, Sweden has not rebounded from last year’s decline. Stockholm reported 12 IPOs with a total offering size of EUR 530m, compared to EUR 933m and 24 listing in 1H18. Ongoing dual-track processes for Synsam, owned by CVC, and Bridgepoint’s renal care company Diaverum, are seeing an increasingly strong pull towards trade sales, as reported.

The window is not totally shut, however, and Stockholm Nasdaq saw successful listings, including those of service group Karnov, real estate company John Mattson Fastighet, and medtech firm Mentice during 1H19. EQT Partners and payments company Klarna could also pull off listings in a less favourable climate. EQT has announced its intention to float in September.

Finland sees upswing in both in- and outbound M&A

Finnish companies are in good shape and operate in a stable, growing economy, making it an attractive M&A environment for foreign financial investors and corporates, Kaltio said.

Finland held parliamentary elections in April, resulting in a new left-of-centre government led by the Social Democrat Antti Rinne. The new government is expected to take a positive view on foreign investment and M&A, Salmi said.

The new government has indicated planned investment into infrastructure, especially road and railways. However, it may also introduce a tax at source for dividend and other asset distribution to foreign investors, and could also further tighten interest-deductibility rules, which may affect sponsors’ and infrastructure investors' ability to deduct interest cost on debt used during a transaction, Salmi said.

The government has also indicated a focus on social welfare and healthcare reform, creating uncertainty about M&A in that sector, which could cool down activity somewhat, Salmi said. New requirements regarding increased nurse-patient ratios will have a short-term adverse effect on companies’ profitability, Klemola said, likely to push M&A in the care sector to its lowest level in years.

ICG’s [LON:ICOP] disposal of care-home operator Esperi is already on indefinite hold since issues emerged at one of its facilities this spring.

While the IPO market is expected to remain inactive for a while, some listings are being prepared, and public-to-private activity is expected to continue, Klemola said. Companies on sale or considering an IPO include EQT-owned pet care group Musti Group, CapMan-owned [HEL:CAPMAN] industrial machinery contractor Fortaco, Korona Invest day-care centre operator Pilke päiväkodit, as well as Jussi Capital and Sievi Capital-owned smart-lock maker, iLoq.

by Hanna Gezelius in London, analytics by Jonathan Klonowski