The uptick in Norway's performance this year is a bright spot in an otherwise more subdued six months of Nordic M&A. The country reported EUR 9.8bn worth of deals across 125 transactions, compared to 134 deals worth EUR 6bn last year, according to Mergermarket's 1H19 Trend Summary.

The year so far has been characterised by an initially quiet first quarter, which livened into a busier subsequent three months, Christian Jomaas, Head of Investment Banking at Pareto Securities, and Jo Isaksen, Head of M&A and Private Equity Coverage at DNB Markets, said.

Norway has a healthy looking 2H19 pipeline and deal activity is expected to be positive with larger volumes of activity most likely to be conducted the mid-market space, Isaksen said. Jomaas added that he expects the large uptick seen in Q2 to continue through the next six months.

Some of this may be prompted by sponsors continuing to make add-on acquisitions for their buy-and-build platforms in Norway, while family offices are starting to get more active and take bigger ownership stakes, Isaksen said.

The seafood, TMT, healthcare, services and infrastructure sectors are most likely to offer M&A opportunities during H2, while activity in the oil services sector is also starting to improve, Isaksen said. Infrastructure deals will continue to be popular, fuelled by low interest rates and investors chasing yield, Jomaas said, adding that medtech and life-science companies could also be active.

While retail in general remains a difficult and poorly performing sector, Altor acquired a stake in sports retailer XXL in June, proving there is still scope for retail cases, Isaksen said. 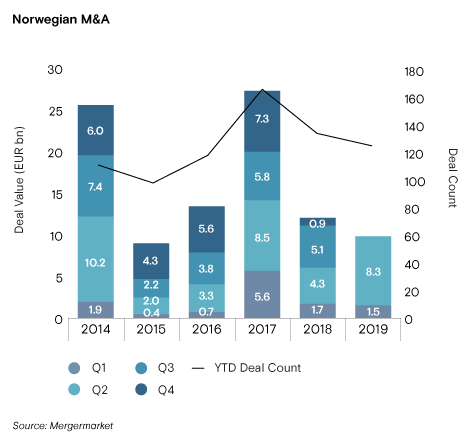 Going forward, there will be an increased focus on resilient, non-cyclical business, Isaksen said.

With 127 deals worth a combined EUR 6.4bn reported to date, activity in Denmark has failed to reach that recorded in either of last year's half-year periods. In 1H18, 137 assets changed hands worth EUR 15.1bn, while in 2H18, there were 150 transactions valued at EUR 6.5bn.

The moderate size of the Danish market means that one or two very large deals can move the market a lot, Michael Eriksen, partner and Head of Advisory at PwC said. The total transaction value in 2018 was partly lifted by the sale of TDC, valuing the company at EUR 8.6bn, to a group of investors including Danish pension funds PFA, PKA and ATP, and Australia’s Macquarie Infrastructure and Real Assets.

The number of deals, however, has also been below last year’s level. The year started slowly, “but the second quarter has been much better,” Thomas Knaack, Head of M&A at Danske Bank said. Expectations among sellers and buyers are not always the same, which means that many sale processes fail before entering the last phase, both Eriksen and Knaack said.

After years of strong activity and high price tags, Denmark, like Sweden, is now late in its cycle and investors are searching for quality assets. One such business that fits the bill is Haldor Topsoe, which sold a 30% minority stake to Singapore-based investment firm Temasek in March for an undisclosed sum after receiving interest from several interested bidders.

Private equity firms remain active and there is still plenty of cash in the market, making for an optimistic outlook for the second half of the year, Eriksen and Knaack said.

Among the private equity deals announced in H1 were Axcel’s purchase of Phase One from Silverfleet in June, and Covidence’s acquisition by UK private equity firm EMK Capital, which it acquired from Montague Private Equity in May, both for undisclosed sums. Axcel was additionally involved in some selling, having divested its EG group in two steps: the service business to DXC Technology Company for an undisclosed sum, and the software development business to US-based Francisco Partners for EUR 496m.

“We have also seen a more bespoke investor approach without large processes, for example industry groups selling to other industry groups,” Knaack said.

Industries still in favour with buyers going into the second half are more defensive sectors such as healthcare, while retail remains out of favour.

The discontinued sale of Orsted’s [CPH:ORSTED] power distribution and residential customer business, which was put on hold earlier this year, is expected to be revived in 2H19.

Denmark’s IPO market remains subdued and saw only a few smaller listings in the first half: Konsolidator[CPH:KONSOL] floated on the main Nasdaq OMX market, and Waturu Holding [CPH:WATURU] and Danish Aerospace Company [CPH:DAC] on the smaller First North - a trend that is expected to continue into the second half of the year.

”In recent years we have seen one or two listings a year on the main market. We expect the same low level this year,” Eriksen said. Where an IPO candidate previously needed at least a DKK 4bn-DKK 5bn (EUR 520m-EUR 650m) valuation to list on the main board, as little as DKK 1bn is now accepted.

Nordic Transport Group, the transport and logistics group, has announced plans to list in the fourth quarter of 2019, as reported.

by Hanna Gezelius in London and Karin Jensen in Copenhagen, with analytics by Jonathan Klonowski