At a time when the French Private Equity space is facing unprecedented levels of competition, sellers have found themselves in a position whereby they negotiate higher multiples, forcing general partners to generate greater value among portfolio companies to keep their rates of return afloat, panellists said during the Mergermarket French M&A Executive Club last month.

Albeit still deemed quite active by panellists, private equity deal flow has slowed considerably compared to last year, according to Mergermarket data. Year-to-date,French private equity players have inked 74 buy-outs for a combined EUR 5.4bn,versus the 99 deals conducted during the same period last year for a total EUR9.5bn.

This slowdown inactivity is not restricted to private equity as French M&A fell overall toregister 244 deals worth EUR 13.5bn year-to-date. This compares to 351 dealsand EUR 47.5bn, respectively, during the equivalent period last year.

The level of Frenchprivate equity deal making is not sufficient to absorb all the dry powderavailable on the market, panellists agreed. As such, French funds, which raiseda total EUR 16.5bn in 2017, according to France Invest’s data, are ready to payhigher prices to deploy their funds.

It is a sellers’market, one of the panellists said, adding that average EV/EBITDA valuationmultiples in France have increased by three units over the last years.

Sellers have been quickto take advantage of this situation and tend to exaggerate EBITDA figures byincorporating forward-looking growth components, which leads to rather unsoundsituations. “It is not unusual for a sponsor to wait at least a year or sobefore its newly acquired portfolio company generates the EBITDA off which itwas marketed when bought”, one of the panellists added. 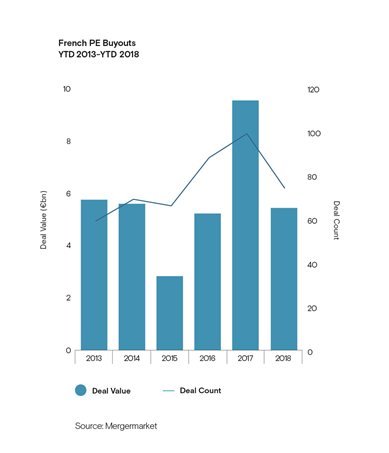 Auction processes, when not pre-empted, become increasingly tight, one of the panellists said. Challenging time constraints leave very little room for negotiation and bidders tend to agree to all the sellers’ requirements such is the competition for assets, the panellist added.

“France has become avery difficult and competitive market for private equity [to conductbusiness]”, one of the panellists said.

Fall in rate of returns

In this context, therates of return registered by French private equity vehicles are expected tofall sharply, one of the panellists said, adding that sponsors are more likelyto generate 10% returns, instead of the 20% they registered a few years ago.

In order to keep their rate of returns afloat, sponsors must engage their portfolio companies in constructive digitisation strategy, panellists agreed.

According to a studyconducted by Apax Midmarket and EY, 94%of French mid-cap companies are aware of the importance of theirdigitalisation, but only 13% believe they at an advanced stage, GregorySalinger, chief digital officer at Apax Midmarket said.

Although digitalisationis a crucial tool to create value, it remains a double-edged sword and sponsorsshould carefully assess the compliance of their companies with the applicabledomestic and European legislations, panellists warned.

“Engaging in adigitalising strategy without respecting the applicable legislation can be verycostly”, one of the panellists said.

Lawyers spend anincreasing amount of time in due diligence assessing the legal risks that comewith digitalisation, as a situation of non-compliance could impact thevaluation of the target, the panellist added.

Starting 25 May, company whose database is not in compliance with the European GDPR regulation can be fined up to EUR 20m or 4% of its worldwide turnover, the panellist reminded.