On average, the firm plans to make one or two investments a year, he said. Exits are more dependent on how much value has been created for each portfolio firm.

It is in talks with targets and has a strong pipeline of potential deals in Germany and Switzerland, which is a very lively market, the managing partner said.

Its equity investments are normally between CHF 15m and CHF 20m and it also participates in co-investments with limited partners in its network, meaning total equity per deal can reach a maximum of CHF 40m, Petersen said.

Cross Equity primarily looks at small cap family succession solutions, largely in Switzerland and Germany. It only invests in majority stakes and normally targets family firms that want to sell on to a new investor, he said.

It is interested in assets within industrials and engineering, and seeks old economy targets with an edge, Petersen said. It is particularly interested in robotics, battery and energy storage, and industrials speciality manufacturers.

It almost always exit its investments via trade sales to strategic buyers, which is preferred, he said. It normally holds companies for three to five years.

Cross Equity does not exclusively carry out a buy-and-build strategy with its investments, but it is engaged in a process for an add-on acquisition for one of its assets which will be announced in the coming weeks, Petersen said.

Now Cross Equity is investing with its second fund which totals CHF 100m. Its final closing was a year ago and it has invested 50% of this fund, leaving around CHF 50m for portfolio and add-on investments, Petersen said.

Its first fund also amounted to CHF 100m and is fully divested save for its smart home solutions firm Rademacher. Once this firm is sold, the fund will go into liquidation, he said.

A sale process for this asset is still in informal stages without mandated advisers and will start properly during the summer, Petersen said.

On April 20, this news service reported that Rademacher’s joint owners Cross Equity and PINOVA Capital had mandated pwc to explore a sale. The asset generated around EUR 50m revenue last year, with top-line growth of more than 5% over recent years. Its EBITDA margin is around 20%, as reported.

Cross Equity has three other firms in its portfolio, none of which plan an exit soon as there is still value to be generated from them. They include wire mesh solutions WDM Wolfshagener Draht- und Metallverarbeitung which it bought this year, airflow component company Punker which it bought in 2015, and high precision tool systems Swiss Tools Gruppe, bought in 2016.

Cross Equity will begin fundraising for its third fund (Cross Equity III) either in 4Q18 or 1Q19, Petersen said. It will carry out the same strategy but could be slightly larger. It is flexible on timing as this depends on progress with its new investments, Petersen said.

In terms of placement agents, in 2008 it worked with Merrill Lynch on its first fund. For its second fund it worked together with FirstPoint Equity in London, starting in 2016 to its final closing mid-2017. It is not yet decided which placement agent Cross Equity will work with for its third fund, Petersen said. It always works with Macfarlanes as legal counsel for structuring of the funds.

As is customary, it operates with advisers for financial diligence and due diligence, depending on the transaction, he said.

Its reinvestment rate with old investors is very good, and for its third fund it will only seek new investors depending on gaps and the size of the fund, Petersen said.

Its limited partners are mainly family offices, he said. In addition, the first fund saw DB Private Equity as a limited partner, and the second fund has US endowment Ohio State University on board.

Its management fees are standard for the industry at 2.5%, and its carry interests stand at 20%, Petersen said. It has a preferred return of 8% (hurdle rate) and a target net return of 20% plus per annum. In total it has around CHF 180m assets under management, he said.

In general, Petersen finds that competition comes mainly from trade buyers that take away potential targets for acquisition.

Cross Equity Partners is based in Pfaeffikon and has 11 employees. It was founded in 2008 by Petersen and business partner Markus Reich, who are both still vice chairmen at 3i Switzerland.

by Emma-Victoria Farr in London with analytics by Silvia Paparello 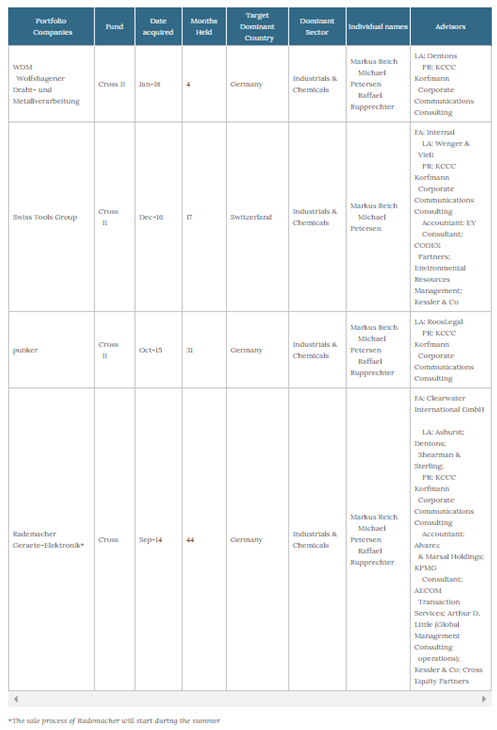