Cives dismissed reports from earlier this year that it had launched a process to sell Swiss electrical products and systems specialist Rauscher & Stoecklin (R&S) with Credit Suisse advising. “There is no official process,” he said. “We want to see where 2018 takes us.”

The private equity firm has held R&S for nearly seven years and needs another year before launching a full-blown exit if all goes to plan, he said. R&S is still integrating Italy’s Tesar and Poland’s ESP acquired in 2016, he added.

CGS uses M&A advisors for exits and for overseas add-ons, Cives said. The sponsor still has until 2021 plus two additional one-year extensions to realise CGS III.

Cement machine specialist Top-Werk has reached CHF 200m in sales with buy-and-build in the last five years and internal consolidation and integration mean an exit could give way earliest next year, or in 2020, Cives said.

It will also prepare an exit next year for SF Tooling Group, a German aluminum machine tools maker, if the integration of the most recent acquisitions goes well, he said. It has held SF Tooling for over four years.

More than CHF 10m remains for buy-and-build in CGS III but Cives said it may also use a company's balance sheet to finance add-ons.

The Pfaeffikon, Switzerland-based private equity firm is targeting two more buys in the next 12-18 months for CGS IV and could take the total portfolio to seven investments, Cives said.

In May it acquired laser technology company Innolas, which is the third investment for CGS IV. Prior to that, it acquired German packing specialist A+F Automation + Fördertechnik in December and German cutting, welding and cleaning machine builder Stuertz Maschinenbau in October of last year.

CGS is looking for industrial companies with sales of up to EUR 80m in Germany, Austria and Switzerland with succession issues or corporate spin-offs, he said. The companies are export-driven and need help to internationalise, he added.

The Swiss PE will look for smaller add-ons for Stuertz to expand its products of cutting, welding and cleaning lines and to expand the company's international reach. It is looking at two companies in Eastern Europe to increase the company’s production capacity, he added.

It will target North America for A+F add-ons to expand product end markets in the food, non-food, cosmetic and pharmaceutical industries, Cives said. Targets may have up to USD 30m in sales and once US expansion is complete it might look to Asia, he added.

Targets for Innolas, with a strong presence in the photovoltaic market, will help the laser machine specialist expand its semiconductor and circuit board industry applications, he said. It will look for targets in Europe and the US where Cives said targets may have sales of up to USD 15m.

by Johannes Koch with analytics by Mate Taczman 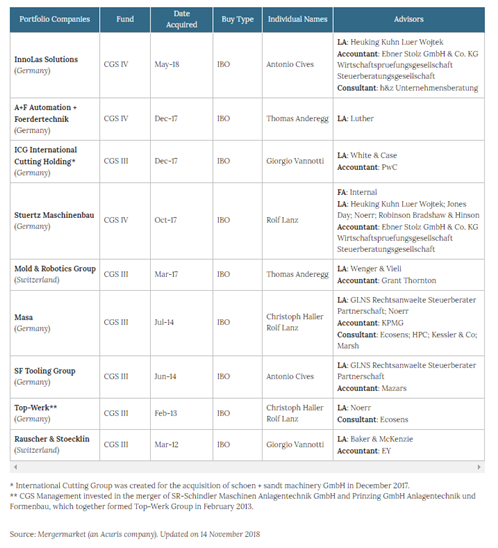