Take-privates on the rise as markets provide private equity fodder

Take-privates on the rise as markets provide private equity fodder

One in three takeovers of listed companies priced above EUR 200m involved private equity last year, as a combination of circumstances have led deal-hungry funds to follow alternative avenues to source targets.

And in today’s bearish market, the number of take-private deals is only likely to rise further, sector bankers told this news service.

With money to deploy and a near saturated mid-market facing them, private equity houses have more actively pursued listed companies. Not only is this fertile ground, but as stock markets move through a correctional phase, value can also be discovered. 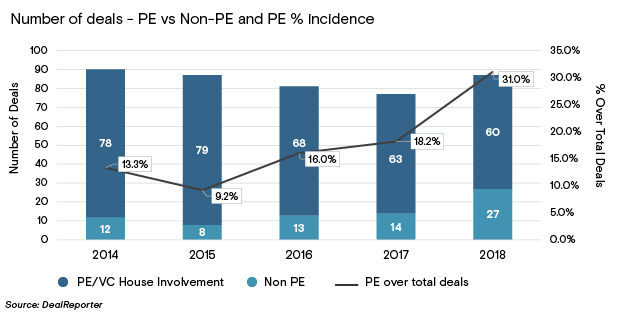 This year has seen Apollo table a 782p/share bid for plastics manufacturer RPC [LON:RPC], which would equate to GBP 3.3bn. Yet subsequent interest from Berry Global [NYSE:BERY], a US counterpart to RPC, may turn into a bidding war, which is a situation private equity would hope to avoid, and a further reason to scour public markets.

Most recently, German lighting group Osram [ETR:OSR] confirmed it is in talks with Bain and Carlyle regarding a possible takeover. The company today is trading with a EUR 3.7bn market cap. This year will have also seen Swedish tool manufacturer Ahlsell [STO:AHSL] persuaded by its largest shareholder, CVC Capital Partners, to delist on 6 March following a near EUR 2.3bn buyback.

As the volume of take-private deals involving private equity rises, the amount being invested across these situations has consequently swelled more than two-fold over a 12-month period. In 2018, EUR 51.4bn was spent taking companies off exchanges compared to EUR 24.5bn a year earlier, data from Mergermarket sister company Dealreporter shows. Last year’s figure accounted for a fifth of the implied equity value across all private equity deal making, versus just 5.8% in 2017.

Among the largest contributing factors influencing growth in this type of takeover has been the need for sponsors to diversify from a crowded mid-market, which has subsequently driven an increase in larger deals.

Graph 3: Breakdown of private equity deals by target size. In 2018, 16 deals were undertaken where a target was valued between EUR 1bn to EUR 5bn - double that seen in 2017 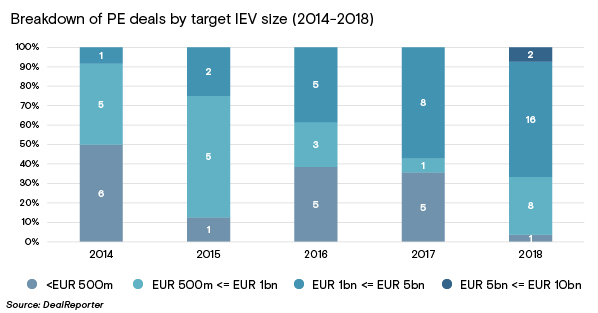 Two bankers named the Industry 4.0 movement as a significant influence on the type of high-growth company that attracts private equity buyers.

UK-based Laird, which is part of the electronics and technology business space, was taken private by Advent in March last year in a deal valuing the company at GBP 1bn.

On the opposite side of the spectrum, Tahseen Siddique, Director M&A at Baird, also pointed towards private equity's inclination to look for asset-light business models that have a significant proportion of recurring or aftermarket revenues.

Marc Potel, European Head of General Industrials Investment Banking at Jefferies, said that in a bear market, private equity firms tend to focus on defensive sectors such as non-cyclical end-markets, including food or late-cycle markets such as aerospace, including take-privates.

Graph 4: Breakdown of private equity deals by sector that took place in 2018 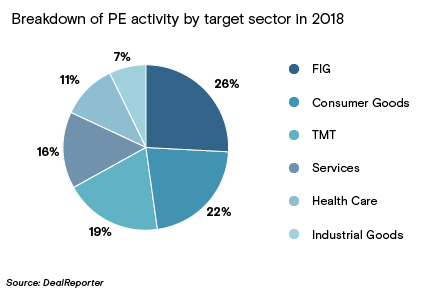 Sector advisors agreed with the sentiment that sponsors turned more readily towards public markets but cautioned against overly optimistic expectations.

While Amo Anim-Addo, Head of EY UK&I Industrials Origination, agreed that private equity is looking increasingly towards public companies as takeover targets, another investment advisor suggested this may not be so as take-privates occupy an even tighter space and can be harder to execute.

There is always competition to acquire attractive targets, and the number of available companies is limited, the first investment advisor said.

Such situations can become cumbersome and involve higher organisational costs and legal fees, the third sector advisor said. As a way of dealing with this, consortiums of two or three private equity funds can appear, sharing risks and opportunities, another advisor added.

In 2018, 10 of the 27 private equity take-private deals came about as part of a consortium. This compares to eight such consortium deals during 2017, when 14 private equity-led take privates took place, according to Dealreporter analytics.

This is only likely to increase as take-private negotiations become more common and buyer and seller expectations widen, the second sector banker said. Sellers will refer to an average five-six years' price, while buyers are applying multiples relating to lower stock prices, he added.

“As we go into a bear market, buyer expectations of value tend to correct immediately, while seller expectations tend to moderate over time,” Potel said.

While market conditions provide opportunities for the private equity buyers, the number of take-private targets may become limited by sector perspectives or individual companies' performance – as well as boards' attitudes toward the involvement of private equity buyers.