Mergermarket, the leading provider of M&A data and intelligence, has released new data to show that 2017 Nordic M&A reached its highest annual value and number of deals on Mergermarket record (since 2001) spurred by disruptive technology investments. The Nordic tech sector hit its highest number of deals on record with 153 transactions announced in 2017. The data was announced at the 9th annual Nordic M&A and Private Equity Forum held on 15th March 2018 in Stockholm.

Nordic M&A in 2017 reached its highest annual value and number of deals with 1,132 deals worth €104bn recorded. The value increased by 76.8% versus 2016, with 93 more deals. The region increased its share of total European M&A activity to 12.6% ahead of both France and Italy. Private equity activity was the key driver behind the uptick – registering 286 buyouts and exits €41.3bn. 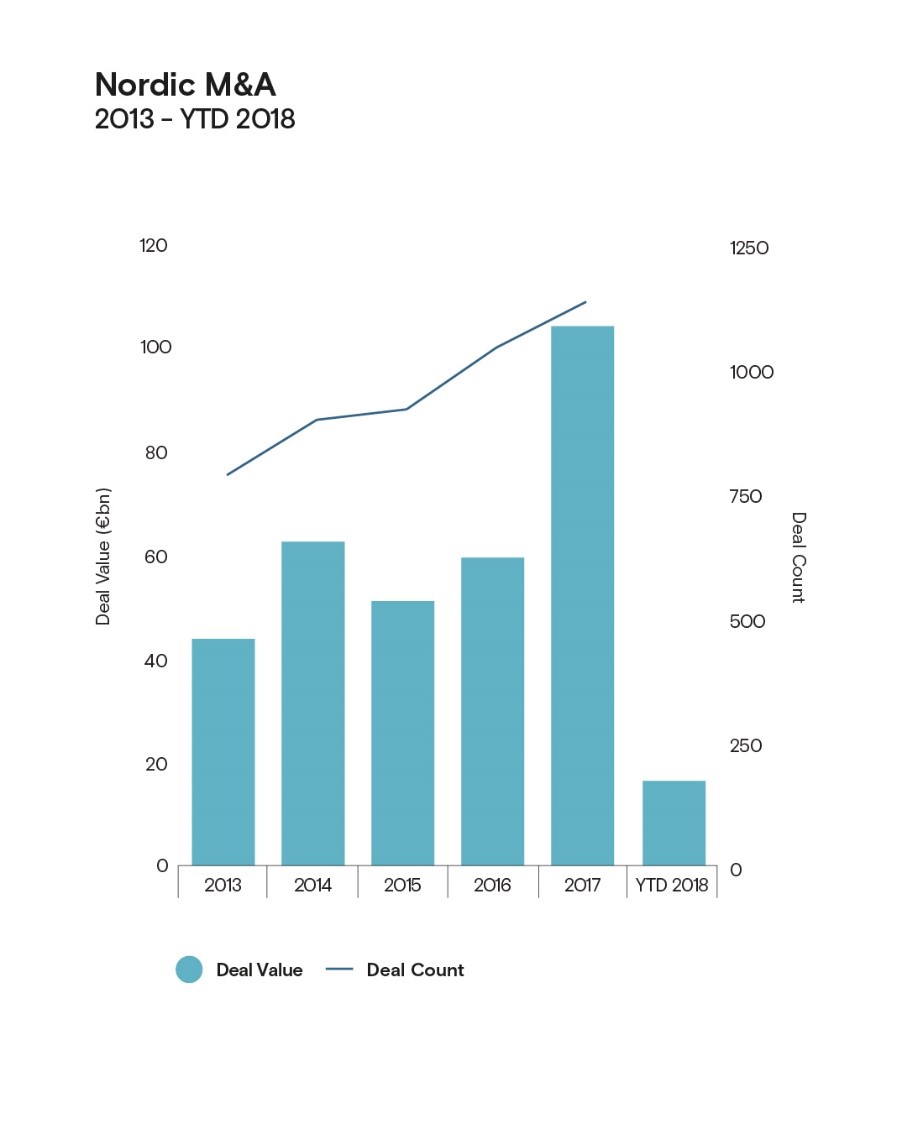 In line with global trends, the technology sector in the Nordics saw a clear increase in activity as companies search for innovative and disruptive offerings. 153 transactions were announced in 2017 worth €6bn – the fourth year in a row with over 100 deals in the sector. A clear example of the push for innovative assets was Autoliv Inc and Volvo’s 50:50 joint venture to develop software for autonomous driving and driver assistance systems.

Jonathan Klonowski, Research Editor – EMEA at Mergermarket commented: “The need to modernise is driving M&A in the Nordics as firms look to buy over building themselves. There remains a need for firms to produce returns for shareholders and the push towards newer and more innovative offerings is a clear approach for companies to take.”

In private equity space, there were 40 buyouts targeting Nordic tech worth a total of €5.2bn – the highest value and deal count on Mergermarket record, 12 more than in 2016. The acquisition of Visma by a group of investors led by HgCapital for €4.7bn was the largest private equity deal of the year during 2017. In terms of IPOs, technology was also the most active sector with 25 listings worth a combined €1.4bn – up from 7 IPOs in 2016.

Swedish telecoms firm Telia has been particularly active – acquiring a number of innovative Nordic firms in 2017. The company acquired Falt Communications, the Scandinavian data communications and Internet of Things service provider, in order to becoming the leading provider of ‘smart’ public transport services. Telia also acquired Humany, a cloud-based Relationship Management system powered by artificial intelligence. The acquisition will enable Telia to enhance their customer-service platform as well as deepen their focus on AI.

2018’s outlook remains positive despite concerns of a potential slowdown due to a potential housing bubble in Sweden and Norway as well as the devaluation of both the Swedish and Norwegian krone against the Euro in the past five years, which could start to take their toll on dealmaking. While the devaluation has the potential to encourage further foreign investment into the Nordic market, the change may see European targets become too expensive for Nordic acquirers. However, with stable governments, relatively low interest rates, an abundance of capital in the market, as well as strong balance sheets, the Nordic M&A landscape is likely to remain active.

Download the full Nordic M&A trend report for 2017 below