The jewel in Sky’s crown

The jewel in Sky’s crown

Media M&A has hit the ground running in 2018 with Comcast’s proposed $40.9bn takeover of Sky.

In today’s multi-screen world, the ever-growing bidder pile-up for Sky shows the value of the company’s platform to anyone trying to resist the seemingly unstoppable march of streaming services such as Amazon and Netflix.

If it succeeds, US cable TV provider Comcast’s GBP 12.50 per share offer, made this week for a controlling stake in the UK-based satellite broadcaster, would be the largest takeover of a UK media firm on Mergermarket record. Increasing competitive forces have already led the global media industry to record USD 17.4bn worth of deals in 2018 so far, eclipsing the USD 5bn seen at the same point in 2017. 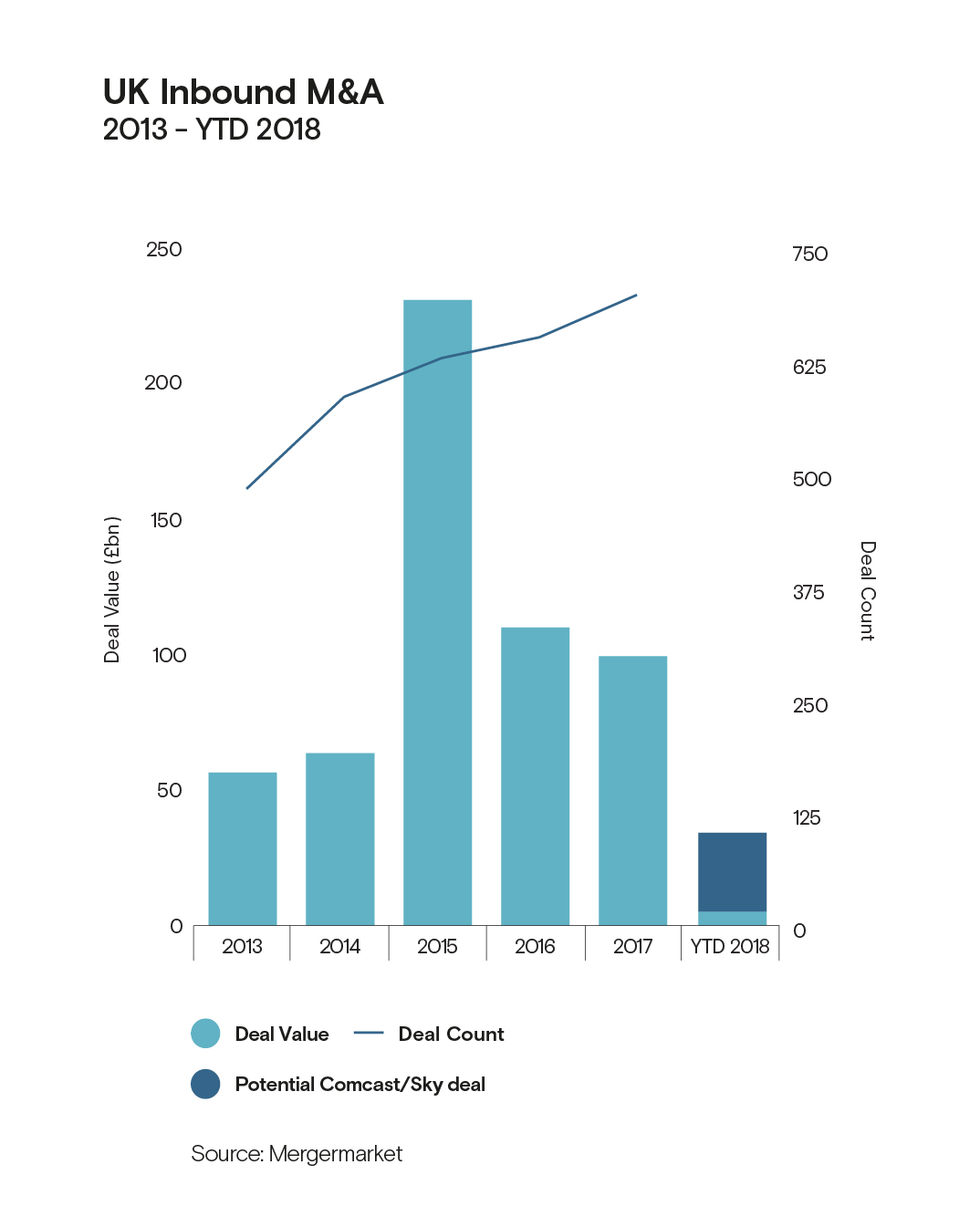 Comcast's move comes as Sky’s 39% shareholder 21st Century Fox continues to seek approval from the Competition and Markets Authority (CMA) for its acquisition of the rest of Sky, following its own now-underwhelming GBP 10.75 per share offer made in December 2016. A year later, in December 2017, Disney agreed to acquire a collection of Fox assets, including the 39% Sky stake, for USD 68.4bn.

This irresistible attraction is largely driven by the strength of Sky’s satellite TV platform. It was further boosted in this week's announcement that Sky’s customers will soon be given direct access to Netflix’s content, as well as by the successful retention of Premier League football TV rights.

The geographically complementary nature of the potential deal(s) and market forces shaking up the US media landscape also offer some clues and a few warning signs.

AT&T, Comcast’s largest US competitor, is a national broadband giant, and one of the largest mobile phone network operators. It is looking to get approval for its acquisition of Time Warner, a top player in content and TV networks. In 2015, it closed its own giant acquisition of a satellite pay-TV operator: DirecTV, in a deal valued at USD 65.5bn.

Amid a rapidly declining number of subscribers to satellite TV, the DirecTV deal mostly made sense as a way to quickly acquire the rights to television content, which AT&T has used to launch an over-the-top (OTT) streaming product, called DirecTV Now. Comcast’s play is likely similar – in its investor presentation, the bidder called out Sky’s NOW TV and IP-delivered Sky Q products – but AT&T’s experience should give it pause.

DirecTV Now, despite offering a broad bundle of content, launched at the stunningly low price of USD 35 per month at its lowest tier and AT&T admitted that DirecTV Now will cannibalize DirecTV’s existing satellite customer base. The problem? Those new OTT customers are paying that low price, versus the much higher subscription price paid by legacy satellite customers.

Traditional satellite is a profitable business. It just happens to be a mature business. The OTT business that’s replacing it is not so profitable – DirecTV Now is widely thought to have gross margins either in the single digits or even slightly negative at its cheapest tier, before taking into account advertising.

For AT&T, though, OTT margins may not matter so much – it’s primarily using the DirecTV Now product as part of a bundle with its mobile phone service, in order to reduce customer churn. That’s the power of the bundle. Will Comcast really be able to make a similar bundle play in what are entirely new markets for the company?