UK Business, Energy and Industrial Strategy (BEIS) Secretary Greg Clark yesterday (24 July) unveiled a white paper, proposing amendments to the Enterprise Act (2002) that would give much broader scope for ministers to block or reshape takeovers by overseas entities to protect national security.

At present, the white paper would significantly expand government oversight of infrastructure and critical sectors - what the proposals call "core areas". This would allow ministers to block deals or ask foreign suitors to undertake remedies.

Foreign takeovers have already seen a dip this year.

Almost half accounted by the ongoing battle for broadcaster Sky [LON:SKY] between 21st Century Fox [NASDAQ:FOXA] and Comcast[NASDAQ:CMCSA], the inbound deal value is up year-on-year. But the 1H18 inbound total of GBP 62.6bn represented just 57% of total UK dealflow, the lowest percentage since the global economic nadir of 2009. 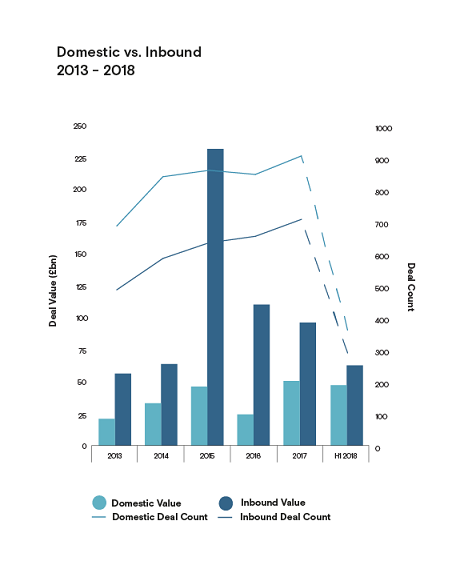 As Bank of England (BoE) Governor Mark Carney has noted, business investment overall in the UK has been dented by Brexit, with firms putting money "much less aggressively than usual" against the backdrop of otherwise benign global economic conditions.

Investment was 3%-4% lower in 2017 than it likely would have been as a result of ongoing Brexit uncertainty, the BoE believes.

The Brexit referendum result in June 2016 was arguably the opening salvo in a now familiar trend across developed economies of rising populism and protectionism, picking at the liberal international consensus that had held since the fall of the Berlin Wall.

Against this backdrop, domestic consolidation has been the order of the day, with Brexit putting the UK's attractiveness to overseas bidders in doubt and leaving British corporates keen to defend their value propositions.

Four of the five largest UK deals in 1H18 were domestic, with the total domestic M&A total at GBP 47.2bn, the second highest figure on Mergermarket record.

Greg Clark may have announced yesterday's proposals, but they bear the fingerprints of Prime Minister Theresa May and her former Chief of Staff Nick Timothy.

In a 2016 campaign speech as she sought the Conservative Party leadership, May said the interests of workers, local communities and the “whole country” could be better taken into account in the deal-approval process for UK target companies. Citing the attempted takeover of the UK’s AstraZeneca [LON:AZN] by US drugmaker Pfizer [NYSE:PFE], she said “something radical” was needed to protect strategically important industries.

“A proper industrial strategy wouldn’t automatically stop the sale of British firms to foreign ones, but it should be capable of stepping in to defend a sector that is as important as pharmaceuticals is to Britain,” May said.

BEIS' proposals would see the UK government take greater powers over the "core areas" of national infrastructure, advanced technologies, direct suppliers to the government and emergency services and dual-use technologies.

The white paper is clear the government's powers would not be limited to these sectors, but are "more likely" to impact takeovers in these segments. Of particular note is the wide-ranging scope ministers would have in the realm of intellectual property ownership. There are also provisions to intervene where takeovers would mean foreign ownership of land close to installations vital to national security.

These rules are akin to those already in place stateside, where the Committee on Foreign Investment in the United States (CFIUS, an inter-agency committee) has been more active in recent years, particularly under President Trump.

For its part, the European Commission is also proposing greater scrutiny, albeit not blocking powers, over foreign direct investment within the EU.

The UK's move does nothing to dent the impression that May is happy to go along with the wave of protectionist fervour sweeping developed economies, as with her Brexit stance.

But there ought, perhaps, to be some caution in assuming the UK is closed for business.

If they become law, the proposals would further reduce visibility for dealmakers adopting a wait-and-see approach to Brexit.

But foreign money may yet be welcome, so long as it's not signed "From Russia, With Love".

by John West in London, with analytics by Jonathan Klonowski